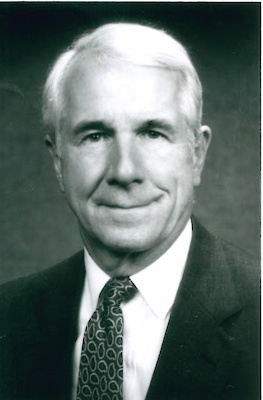 George J. Morgan, 90, died at his home on Friday, December 3, 2021. He was born in Nesquehoning, PA, to William H. and Gertrude Morgan.  He was predeceased by his sisters Gertrude and Deanna. He is survived by his wife Caroline B. Morgan.

George was very proud of growing up in the beautiful Pocono mountains where as a young boy, he earned the rank of Eagle Scout.

He served in the U.S. Navy 1948-1952 on the destroyer USS Leary. His service was during the Korean War, and upon discharge he attained the rank of Petty Officer 1st Class.

Following his Navy service, he enrolled in Franklin and Marshall College graduating in 1956 at which time he was presented with the school’s distinguished Williamson Medal.  He entered Temple Law School graduating in 1959 and began practicing law in Lancaster that same year.

His first residence in Lancaster County was in Lititz, PA, where he served on the Lititz Rec Center Board. George served on the bank board of Farmer’s First Bank and Susquehanna Bank.
In 1980 he began two consecutive terms as Lancaster County Republican Chairman and enjoyed getting to know the people and the far reaches and outlying areas of the county.

He appreciated greatly the Victorian history of his firm’s office building at 700 North Duke Street. He had a passion for the practice of law and loved the challenge of solving legal issues for his clients.  Notably, he went to his office every day, through May of this year, 2021.

As an outdoor enthusiast, he was a fly fisherman, hunter, bird watcher and golfer for the sheer pleasure of walking the course and observing the birds and animals.

A memorial service will be held at Trinity Lutheran Church, 31 South Duke Street, Lancaster, on Saturday, December 18, 2021 at 11:00 am. Family is recommending masks to be worn at the church.

Offer Condolence for the family of George J. Morgan