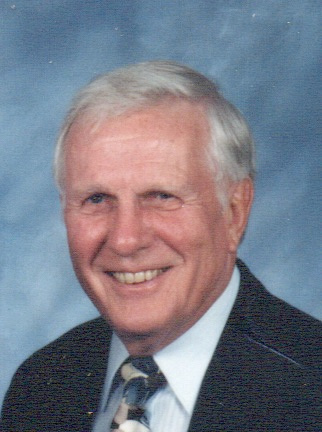 George Frederick Smith, age 94, passed away peacefully Monday, March 16 at Willow Valley Communities where he had resided for 20 years. He was the beloved husband of Doris Drum Smith for over 68 years.

Born in Sunbury, PA, Fred was the son of the late William K. Smith and Jennie Hoff Smith.  After graduation from Sunbury High School in 1943, he entered the Navy V-12 program at Stevens Institute of Technology in Hoboken, N.J, graduating in 1946 with a degree in mechanical engineering. He was commissioned as an Ensign USNR and served aboard the USS Denver and later the USS Fogg until July 1947, ending his active duty. Later he worked for Ebasco Services for five years. He was then commissioned as a Lt. j.g. and recalled to active duty in the U.S. Navy, serving another five years aboard the Edward H. Allen DE531 as a gunnery officer during the Korean War.

In 1951 he married Doris Drum, a teacher at Sunbury High School. After returning from active duty, Fred and Doris moved to Lancaster and Fred worked at Armstrong World Industries as a project engineer, and later moved on to Senior Staff Engineer in the Central Engineering Department. He retired after 36 years with Armstrong.

A member of First United Methodist Church since 1954, he served on various committees and boards and on the usher crew for 46 years.

Fred was a member of the Mu chapter of Chi Phi Fraternity; the Lincoln Chapter of the PA Society of Professional Engineers; the American Society of Heating, Refrigeration and Air Conditioning Engineers; Chairman of Boy Scout Troop 99; a member of the Manheim Township Code Compliance Committee; and the Lancaster Chapter of the Military Officers Association. He was also a member of Lodge #22, F&A Masons, Sunbury PA.  Fred was an excellent bowler and bowled for many years with the Armstrong league and then with the league at Willow Valley until just two years ago.

Fred volunteered at Lancaster Regional Hospital for 20 years and at the Glen after moving to the Willow Valley retirement community.

Dear to his heart was his service for 16 years as coordinator of Math Counts, sponsored by the National Society of Professional Engineers. In 2011 he was honored by the Lancaster Chapter of PSPE with its Lifetime Achievement Award.

There will be a graveside service for family only and a memorial service scheduled at a future date.

Offer Condolence for the family of George Frederick Smith