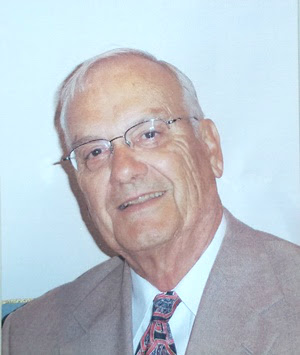 George D. Robertson, 88, of Elizabethtown, passed away on November 2, 2017 at Masonic Villages. He was the loving husband of Mary Arlene (Charles) Robertson. Born in Lancaster, PA., he was the son of the late George and Gladys (Brubaker) Robertson.

Following graduation from high school, he proudly served in the US Navy during the Korean War.

He spent much of his professional career with RR Donnelly & Sons as a Supervisor.

George’s true passion was music where he began by studying with Earl Echternach. A classically trained pianist, George had a diverse love for all types of music. In his early years he was known for performing with his Jazz band, the Starlighters.

He served as Choir and Music Director at Salem UCC (Rohrerstown) where he was able to perform his love of spiritual music. He also served as a Deacon and was an Elder.

In addition to his wife, Arlene, he is survived by two daughters, Brenda Kilgore (wife of Rudy) of York, PA and Cathy Zerphey (wife of Steven) of Port Charlotte, FL, and a son, Scott Robertson (husband of Anne Meade Daniel) of Arnold, MD. Also surviving are a sister, Jeanie Aument and 6 grandchildren, 4 step-grandchildren and 3 great-grandchildren.

Relatives and friends are invited to attend a Memorial Service on Monday, November 6, 2017 at 11:00 AM at Salem United Church of Christ, 2312 Marietta Avenue, Lancaster, PA 17603 with the Rev. Laverne DiNino officiating. A visitation will be held from 9:30 AM until the time of the service. Interment will be private at the convenience of the family in Indiantown Gap National Cemetery. In lieu of flowers, contributions in George’s memory may be made to Salem United Church of Christ at the address listed above. To leave an online condolence, please visit: www.DeBordSnyder.com

Offer Condolence for the family of George D. Robertson