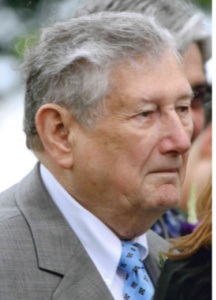 Gardette Lewis Cumpston was born on the ninth of April, 1931 in Fort Dodge, Iowa. The fourth child of Charles Lewis and Myrtle Zelda Cumpston. He had two older brothers, Dale Lee and Duane Charles and an older sister, Geniel Elaine Mestad. He also had a younger brother, Darrell Andre and younger sister, Kay Eloise Cumpston Bruning.

The family lived in Fort Dodge, Tama and then Adel, Iowa before moving to a farm between Dexter, Adel and Earlham. Gardette graduated from Redfield High school in 1948 and enlisted in the US Air Force. After four years as a Radar Repairman he was discharged and attended Iowa State College graduating with a Bachelors Degree in Electrical Engineering in 1957. Gardette and Annette Suurmeyer were married in 1955. The first of four children (Mark Stephen) was born in 1956. A job was accepted with the US Navy in San Francisco.

In 1959 the family moved to Arlington Virginia as Gardette accepted a job with the Navy in Washington, D.C. The plan being to stay for a couple years then return to California.

The plan to move never happened as the family enjoyed the opportunities available in the Washington D.C. area.

Annette worked for Arlington School system for several years in order to pay for the college education of the children. Mark having taken advantage of the GI bill. Gardette retired from Navy employment in 1986. In 1992 the first signs of a dementia problem became obvious. The family took care of Annette at her home until her death in October 1997. Complications from Alzheimers was the major cause. Marjorie Baker, a former roommate and friend of Annette helped with a memorial service for her. Gardette and Marjorie kept in contact although there was one hundred and twenty miles between the two households.

In 2000 Gardette and Marjorie were married and moved to Gulf Breeze, FL. After twelve very good years in the Florida Panhandle they moved to Willow Valley Retirement Community to be closer to seven of the eight kids. Mark had moved to the Gulf Breeze area to oversee the “Old Folks.” In 2012 Marjorie and Gardette (knows as Lou) decided to look for a retirement location that was closer to their combined children and grandchildren. A very nice location in Lancaster was found and they moved in to Willow Valley in May 2012.

A memorial service will be held on Saturday, January 29, 2022 at 11 AM at DeBord Snyder Funeral Home, 141 E. Orange St. Lancaster, PA 17602. Friends may greet the family from 10 AM until the time of service. Service will be available via livestream at: https://my.gather.app/remember/gardette-cumpston

Offer Condolence for the family of Gardette “Lou” Cumpston