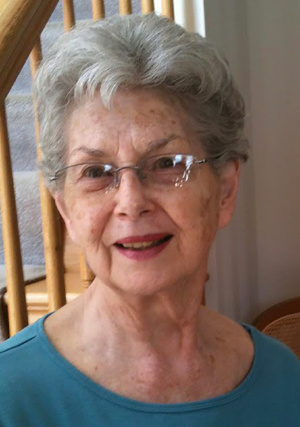 My beautiful wife has succumbed to the ravages of Alzheimer’s Disease.

She married me on Saturday, June 16th, 1956 and unfailingly brightened my life ever since. We met when I painted scenery for a Schenectady Light Opera production of“Music in the Air” in which she sang the leading role and we married a year later. During our 63 years together Gail’s loving heart and wisdom transformed five apartments and three houses into homes full of warmth, comfort and happiness for me and the world’s three most beautiful and loving children she gave me: Amy, married to David Oblender, Cy, married to Sherry Cooper and Carrie, married to Chuck Aukamp. A meticulous housekeeper and dedicated mother, she instilled, by example, love and kindness and generosity into our children and then welcomed with open arms their partners in to our lives. Our five grandchildren, Matthew and Robert Oblender, Emily Tunstalle and Win Aukamp and Addie Kirchner have rewarded her with affection and respect which have given her endless joy and pleasure. Sadly, our three beautiful great-granddaughters, Sophia, Savannah and Gemma arrived after her memory had begun to falter and she was unable to express her love verbally, still the warmth in her eyes clearly spoke for her.

After the children were grown and educated, Gail went to work with the Actors’ Company of Pennsylvania and found enormous satisfaction in establishing and growing their subscription ticket sales base as well as functioning as bookkeeper. She also lent her lovely soprano voice to some of the Actors’ Company productions on the Fulton Opera House stage.

Gail has been a true life partner, often carrying more than her fair share of the load. I have failed, I know, to tell her how much I love her. Our children and I have been endlessly blessed by her presence.

Gail was born March 13, 1932 in Camden, New Jersey, the daughter of Llewellyn and Alice Doonan. In addition to our immediate family she leaves her brother Douglas Doonan, his wife, Gail and their two children, Jill Olwert and Wesley Doonan.

The children and I thank the staff and care-givers at the Quarryville Presbyterian Retirement Community for the excellent care and affection they provided Gail.

Offer Condolence for the family of Gail D. Whitson