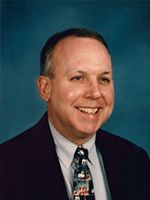 Fred was born on April 7th, 1943.  He earned a Bachelor of Arts degree and a Master’s degree in education from Temple University.  He was an educator and administrator in the Philadelphia and Hatboro Horsham School Districts, and in Development for the Walnut Street Theater, The Pathway School and for Children International.  In acknowledgement of his achievements Children International dedicated their library in Quito, Ecuador to him to provide books and education for underprivileged children.

He is preceded in death by his parents Frederick Russell Carbaugh, Sr., and Alma Staley Carbaugh.

Contributions in his memory can be made to Wayside Presbyterian Church at the address shown above or to Homestead Village Endowment Fund, 1800 Village Cir, Lancaster, PA 17603.  Please omit flowers.

Fred was a person who was liked by many, volunteered his services in the community and will be missed by all.

Offer Condolence for the family of Frederick R. Carbaugh, Jr.