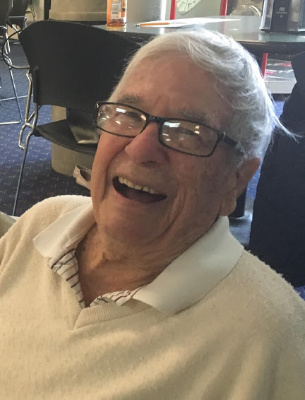 Fred Daniel Daum passed away at home and peacefully on Saturday, June 29, 2019. Fred was born on March 7, 1930, to Fred J. and Ida Miller Daum. Their only child, Fred always lived life to the fullest from the time he was a youngster, running next door to his aunt’s house to find out if her dinner was better than what his mom was making, and up through his adulthood. While a Junior at Manheim Township High School, he contracted Polio and Pneumonia at the same time and was given only a 50% chance of living. As the determined man he’s always been, he beat the odds through his active participation in music and golf, coming back stronger than ever with Senior year making All-State Band for trombone. He graduated High School in 1947 and served in the U.S. Navy 1951 to 1955 during the Korean War. While in the Navy, he was stationed on the U.S.S. Kearsarge and continued to play trombone in the Navy band.

After serving in the Navy, Fred went on to attend Franklin & Marshall College, graduating in 1956 with a degree in Economics and majoring in Finance. Fred always had a passion for golf and was honored to serve as Golf Coach at his collegiate Alma Mater from 1979-1995 capturing many accolades including 5 Middle Atlantic Conference Championships. He even constructed a miniature golf area in his back yard for all to enjoy.  Fred tried to share his love of golf with his two daughters and son-in-law but it was his two grandsons that ultimately share his passion for the game.

In addition to his love of golf and music, Fred was passionate about the history of Lancaster county and for the rich farm land that he worked so hard to preserve. Along with his good friend, Dick Armstrong, he formed the LAND organization, a land preservation group that opposed the ‘Goat Path’ completion. During his tenure with LAND, Fred gave over 90 presentations to concerned citizens and government officials, encouraging preservation of the farmland that is such a rich gift for Lancaster County and the surrounding area.

Fred was always the life of the party and he hosted several large get-togethers at his home, hiring everything from steel bands to banjo players to provide entertainment. He always enjoyed having fun and getting together with friends, often as the last one to leave the party. He and Ida Aho, his partner and BFF in life, could often be found at countless concerts, parades, and any social events.  They spent many summers at Cape Cod where she had a summer home.  The Fourth of July celebration was always his favorite, and until recently you would find the two of them at Smith Mountain Lake in Virginia with his family, typically donning a crazy flag themed t-shirt or a silly hat, or both, to celebrate the event.

Fred was preceded in death by his father, Fred J. Daum, and his mother, Ida Miller Daum. He has been the rock and caregiver for Ida as her dementia progressed.  He is also survived by his two daughters from his marriage to Billie Jo Herr, Sue Daum of Cary, NC, and Patty Geiger (husband Ted Geiger) of Apex, NC, two amazing grandsons, Clay Geiger and Danny Geiger, both of NC, and countless extended relatives and friends who will all miss his wit and love of life.

A visitation will be held on Tuesday from 5-7 PM at DeBord Snyder funeral home, 141 E. Orange St., Lancaster, PA 17602  and a small graveside service will be held for family at Longenecker Reformed Mennonite Cemetery on Wednesday. To better honor and recognize Fred’s joy for life, a Celebration of Life (actually a real Fred Daum-style party!) is planned to take place in the Fall. Celebration of Life details will be shared as soon as details are confirmed.  The family requests that, in lieu of any flowers or condolences, donations be made to the Lancaster Farmland Trust, a non-profit organization with the goal of preservation the land and rich heritage of Lancaster County.  A Direct Link for donations: https://lancasterfarmlandtrust.org/donate/.

Offer Condolence for the family of Fred Daniel Daum