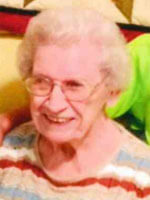 She was the wife of the late Lawrence J. Brensinger.  Born in Norristown, PA she was the daughter of the late John J. and Margaret V. Johnson O’Connor.

Florence graduated from Norristown High School in 1937.  She began working for Bell Telephone Co. of PA in 1939 as an operator in Norristown.  She moved to multiple Bell locations in Pennsylvania, holding various management positions, before retiring in 1976.     She was a member of St. John Neuman Catholic Church in Lancaster.   Prior to moving to Lancaster she had been a member of St. Alyosius Catholic Church in Pottstown.  Florence enjoyed traveling and spending time with her family.  She was a member of the Verizon (Bell) Pioneers and a former member of the Elks Club and Antique Car Club in Pottstown

A Mass Of Christian Burial will be held on Monday, January 23, at 12:00 Noon at St Aloysius Catholic Church, 223 Beech St., Pottstown PA.  Friends may call at the church on Monday from 11:30 A.M. until the time of the service.  Interment in Highland Memorial Park, Pottstown, PA.  In lieu of flowers, contributions in her memory may be made to Homestead Village, 1800 Village Circle, Lancaster, PA  17603.

Offer Condolence for the family of Florence O. Brensinger