You are here: Home / Obituaries / Florence A. Muehleisen 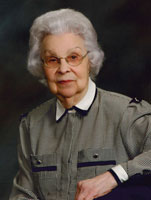 Florence A. Muehleisen, 95, of Lancaster, passed away on Sunday, December 23rd, 2012 at Hospice and Community Care, Lancaster, PA.  A life-long resident of Lancaster, she resided at Willow Valley Retirement Communities for the past twelve years.   Born on October 4, 1917, she was the daughter of the late J. Landis and Anna M. Norbeck.   She was preceded in death by her husband of 63 years, Richard S. Muehleisen, who died in 1999.  Her sister, Miriam Knoll, also preceded her in death.

The focus of Flossie’s life was her family.  She was a devoted wife, mother and daughter.  Flossie was an accomplished seamstress, enjoyed knitting, bowling, reading and was very involved in her children’s activities.  She was a Charter member of Hamilton Park United Church of Christ.  She was also a member of American Association of Retired Persons, National Association of Retired Federal Employees, Silver Threads, Ladies Postal Auxiliary and a ten-year employee of Hagers Department Store.

Relatives and friends are invited to attend Flossie’s memorial service at Hamilton Park United Church of Christ, 1210 Maple Avenue, Lancaster on Friday, December 28th at 6:00 p.m. with the Rev. Catherine M. Shiley officiating.  A buffet in the Maugans Chapel will immediately follow the service. Private interment will be held at the family’s convenience.  In lieu of flowers, contributions in Flossie’s memory may be made to Hospice and Community Care, 685 Good Drive, P.O. Box 4125, Lancaster, PA 17604-4125.

Offer Condolence for the family of Florence A. Muehleisen