Final steps: a look inside a funeral home

It’s a cold shiver on a dark night. It’s the creepy feeling of foggy cemeteries and creaking caskets.

It’s funereal black and the blankness of nothing. 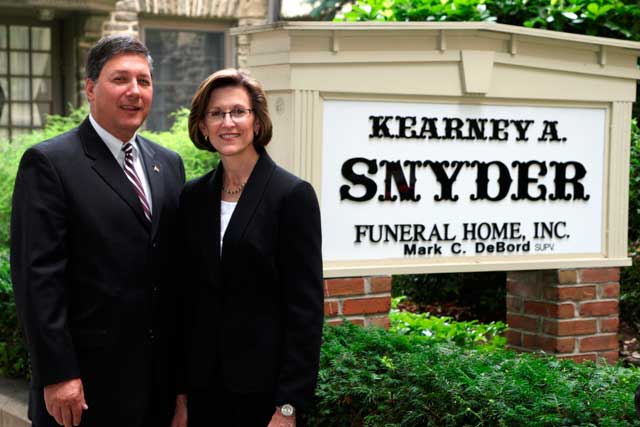 It’s inevitable, it’s unavoidable and it scares the bejeepers out of us.
It’s death.
Our death.
The most frightening thought of all.

“For a lot of people, it’s the unknown,” said Mark DeBord, president of the Kearney A. Snyder Funeral Home, 141 E. Orange St., who has handled thousands of funerals. People fear what they don’t know or understand.

DeBord, 45, and his wife, Diane Snyder DeBord, 46, a third-generation member of the Snyder family business, agreed to open their workplace to the New Era to demystify modern-day funeral procedures.

They pulled back the shroud of mystery and let us peer into the inner workings of their business.

First off, the DeBords want people to know their business has just as much or more to do with the living as with the dead.

“In the funeral profession,” said Mark DeBord, “we take care of the deceased, there is time spent there. But more time is spent with the living. I get fulfillment being able to help those people.

“Sometimes people come in and say, “Can I do this?’ or “Can I can do that?’ I tell them, “You can’t do anything wrong.’ It might not be what other people would do but no two funerals are exactly alike.”

DeBord has buried a beloved motorcycle with its owner and cherished pets with their keepers. He has honored just about every other request, unusual or not.

But the couple is not too keen on undertaker humor.

Diane DeBord said when she was growing up, she noticed people joked about her family’s business until someone in their family died.

“Then it wasn’t funny anymore.”

The funeral home has strict guidelines of respect and reverence for the deceased.

Guided by that policy, the very first thing the funeral home does when someone has died is to make sure they have the right person by verifying with family members or a nurse.

The body is brought to the funeral home and “set up.”

Mark DeBord, or the other two licensed funeral directors, Dominick Adamo and Bill Boyd, close the eyes and cross the arms of the person.

“We like to do the process as quickly as possible. There is an issue with rigor mortis. It becomes not as easy to do the work.”

If the death is suspicious or if there is a crime scene, the coroner’s office gets involved, said DeBord.

“We don’t have refrigeration here,” he remarked, “but we use the county morgue if that’s necessary, as do most of the funeral homes.”

The “operating room,” as they call one of the lower rooms of the funeral home, is indeed hospital-like.

The room has light green walls and a gray cement floor. A super-clean antiseptic smell hangs about in the air. Ceiling lights and track lighting brighten the room until it is nearly as illuminated as a hospital operating room.

Several tables are in the room.

Some of the tables are used for dressing and preparing bodies.

There is a sink that has a long hose for shampooing hair.

The embalming table is porcelain, with a small trough running on either side of it.

The next step is to clean the body. Mark DeBord thoroughly washes the deceased with soap and water. The water runs down a small trough on the table and into a holding tank.

The holding tank is a biohazard container that is picked up at the funeral home, just as it is in a hospital.

Next, the hair is shampooed.

After that, embalming may be done but is not required by law and may not be necessary if the body is going to be cremated.

“The purpose of it is to preserve the body for viewing purposes and for the service,” Mark DeBord said.

Embalming is a two-step process.

A small incision is made in the neck into the carotid artery. The embalming fluid, which is a chemical preservative, is injected into the artery.

Then the blood is drained through the jugular vein.

Diane DeBord does most of the hair styling. She was taught by her sister Jill, a stylist for the living. Next comes the makeup, a skin-tone undercover and a little added makeup for women.

“We don’t like to use a lot of cosmetics,” said Mark DeBord.

They color and cut hair as the family wishes, they said.

“We had a daughter request that her mother have her hair colored, and even though she was about 90 years old, she didn’t look 70,” said Mark DeBord.

The DeBords like relatives to bring a recent picture of the deceased, so they can get the hair and makeup right.

“We’ll use Mary Kay or anything,” he said.

They like to use a woman’s own makeup, if possible.

“I feel like I can help people through the process,” said Diane DeBord. “I can give comfort to the family members who are left.”

There is comfort here, symbolized by the box of tissues in every room of the elegant Victorian building. The DeBords order tissues by the case.

The one thing that always shakes these two professionals to the core is the death of a child.

“One of the first families I ever served,” recalled Mark DeBord, who was first licensed 24 years ago, “was a young couple that had a child that died. We privately set up a rocking chair in the holding room and let the couple rock the youngster and take the time that was needed.

“The child was about the same age as my kids at the time,” he added. “The experience made me appreciate life more and realize how important family is.”

Two years later, the couple had another son, and they called DeBord to tell him they named him “Mark.”

“That always stuck in my mind,” Mark DeBord said, “The little things you do that can really help people.”

The DeBords are strong proponents of viewings, private or open.

“It just gives the family a chance to say goodbye,” Diane DeBord said.

There are very few circumstances in which the DeBords will recommend against a viewing, such as for the victims of horrendous accidents.

“I always give them that choice, however.” Mark DeBord said. “It’s up to the family.”

They said people handle death in many different ways, so they do not think of special requests as odd. They just honor them.

“People can pretty much do what they want,” said Mark DeBord. “Like putting things in the casket. For instance, someone may have had a dog that had died and was cremated and the family wants the remains in the casket. Fine.”

But the DeBords’ most unusual request came from the family of a young man killed in a motorcycle accident several years ago.

“They wanted the motorcycle buried with him, partly because they did not want anyone else to get hurt on the motorcycle, and he loved his motorcycle.”

The couple said although death is often associated with ominous and frightful images in books and movies, they see a trend toward more openness and acceptance of the idea of death.

“I credit a lot of that to hospice,” said Diane DeBord. She said the program does a good job of counseling the families of the dying.

Both Mark and Diane said they enjoy their job, although neither one started out wanting to go into the business.

Mark DeBord first got a degree in recreation, and when he went to pick up Diane for their first date, passed by the family’s home because he didn’t think anyone would live over a funeral parlor.

“I think it’s something you have to be around enough to get comfortable or grow up in a family like Diane’s,” said Mark DeBord.

In their early 20s, they decided to go back to college together _ to mortuary school. And they’re glad they did.

“People might think recreation and the funeral business are complete opposites,” said Mark DeBord. “But in both you are helping people, that’s what we like to think we’re doing.”

“With actually not starting in the business, my views certainly have changed about death,” said DeBord. “It’s going to occur for all of us. I think that it isn’t something that I personally sit and worry about. Am I afraid of death? No. But am I ready for it? No. I’d like to grow a little older, and when the time comes, hopefully I will be able to face it.”

Randy passed away unexpectedly at his home in Alameda CA on December 16, 2022 with his ... Read complete obituary here.

This obituary is not yet complete. Kindly check back later. Thank you. ... Read complete obituary here.

Joanne passed quietly in the home her beloved husband Joe and she built together. She went ... Read complete obituary here. 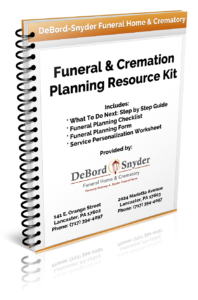