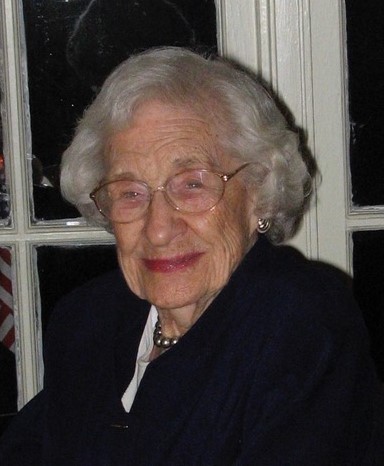 Esther Fry Schlosser, 105, passed away peacefully in her apartment on January 12, 2017 at Brethren Village surrounded by her nearby family, her books, and dozens of photos of her grandchildren and great grandchildren.

Born on November 19, 1911, in Chestnut Hill Hospital, she was the daughter of the late

William Warder Brittain and Harriet (Gartley) Brittain.   Esther spent her early years in Mt. Airy, Pennsylvania then later moved to Ventnor, N.J. where she spent her early teenage years, and would meet her first husband Billy Fry (William Jefferson Fry, Jr.) whom she would marry many years later.

She attended Miss Fine’s School in Princeton for her high school years, and in 1934 graduated from Hood College in Maryland, where she was president of her senior class.

In 1935 she married William Jefferson Fry, Jr. They lived in Huntingdon Valley, PA for 40 years, where they were active in their Episcopal church. After Bill’s retirement, they moved to Manheim to be close to their youngest grandchildren. They lived in Manheim until Bill passed away in 1989.

Her long life as an avid reader with a love of language and poetry began when she entered first grade at Mill’s Outdoor School for Healthy Children. From her first day, she rode the train to school and sat in a small building with windows open throughout the year.

Her love of books and learning led later in life to working as a librarian at the Abington Memorial Library.

In 1993 she married Galen H. Schlosser, a long-time family friend from Philadelphia, and native of Elizabethtown. They moved to Brethren Village where Esther lived for her last 23 years. Galen passed away in 2002.

In her spare time, she enjoyed playing bridge, reading, walking the trails around Eagles Mere with her friends, and researching her family history that went back to colonial times in Philadelphia.  However, what meant most to her was spending time with her family.

A Memorial Service will be held in the chapel at Brethren Village, 3001 Lititz Pike, Lancaster, PA 17606 on Saturday, January 21, 2017. Visitation with the family will begin at 10:00 a.m., and the service will follow at 11:00 a.m. Internment will be in the Fry family gravesite at St. Paul’s Episcopal Church in Elkins Park, PA.

Offer Condolence for the family of Esther Fry Schlosser