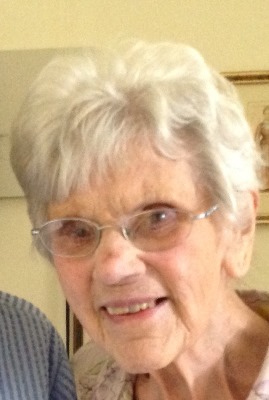 She was born December 14, 1917, in Pea Ridge, Missouri, the fourth child of John Wolf Hess and Lizzie Burkholder Hess. In early childhood, her family moved to Manson, Iowa and then returned to Akron, Pennsylvania. She attended elementary school in Akron and high school in Akron and at Eastern Mennonite High School in Harrisonburg, Virginia. After graduating, she worked at the family-owned Miller-Hess Shoe Factory in Akron, where her father also worked as a shoe salesman.

In 1940 she entered the school of nursing at the Mennonite Hospital in La Junta, Colorado. Following graduation as a registered nurse she worked at hospitals in Denver, Colorado, and Mount Pleasant, Pennsylvania, and in a Civilian Public Service camp for conscientious objectors in California, always enjoying seeing new places and meeting new friends. She then returned to the Mennonite Hospital in La Junta, Colorado, as evening supervisor. After several years, she moved to the Pacific Northwest with nurse friends, working in hospitals in Oregon and Washington. She returned to Pennsylvania to help her mother through a surgery, worked at Lancaster General Hospital briefly, and then toured Europe with family members and friends before returning to her nursing work.

In 1974, she left La Junta, went on a cruise to Australia and New Zealand organized by the American Nurses Association, and remained in Hawaii on the return. She worked as a nurse in Maui until 1976, when she moved to Loveland Colorado. She worked as a nurse at the Poudre Valley Medical Center in Fort Collins, retiring in 1983 to embark on a trip to Japan.

After returning to Loveland, she observed (in her own words), “You can live on Social Security, but you can’t have much fun.” So, she returned to work at the Good Samaritan Nursing Home in Loveland for several years. She retired finally, when, as she noted, she was admitting patients younger than herself to the nursing home.

In 1985, she lost her long-time friend and housemate, Verena Widmer, and another of her closest friends, Florence Grieser, in an automobile accident.

In 1990, she moved to State College, Pennsylvania, at the invitation of her niece and niece’s husband, Judy and Mark Nord, to live with them. She moved with the Nords to the Washington, DC area in 1994, then to her own apartment in Millersville, Pennsylvania, where she lived from 1995 to 2010.

In 2010 she moved to the home of her nephew and his wife, Herb and Beth Hess, in Millersville, then to Hyattsville, Maryland, again joining Judy and Mark Nord. In 2013 she moved to the Conestoga View Nursing Home in Lancaster, Pennsylvania.

The defining quality of Emma’s life was her commitment to serve and nurture others, as a nurse, as an administrator, as a loving daughter, sister, aunt, friend, and neighbor. This was a lived commitment deeply grounded in her Christian faith, learned from her parents and strengthened throughout her life by the Mennonite community in which she was firmly embedded. At critical career points, she sought to know God’s way for her and prayed for guidance. Added to this core commitment was a zest for life, a love of travel, and a taste for adventure that made her service not only effective, but also joyful and enriching to those she served and loved.

She is survived by: sister, Sara Hess Hess, wife of the late Herbert S. Hess; many nieces, nephews, grand-nieces, grand-nephews, and great-grand-nieces and nephews whom she loved and nurtured.

She was preceded in death by brothers: Joseph Hess, Simon Hess, and James Hess; and sisters: Alma Hershey, and Margie Hershey.

Offer Condolence for the family of Emma Hess