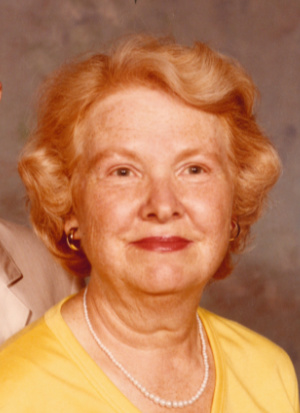 Emily C. Jackson, after living a long and loving life, passed away on April 27, 2021 at the age of 95 at Landis Homes, Lititz, surrounded by her children and friends.

Emily was born in Vermont, Illinois to the late Harry Franklin Chick and Roxanna Johnston Chick. She attended Knox College in Galesburg, Illinois for two years during World War II. It was at Knox that she met her future husband, Roderick Jackson, an Army Air Force pilot from South Carolina at a USO dance. The dance led to wartime correspondence and to marriage when the war ended. Emily and Rod shared 58 years of marriage and four children: Margaret Egli married to Charles, of Kennett Square, PA; Rod Jackson and wife Crystal of Florida; Emily Guerra of Texas; and Jeffrey Jackson of Lancaster. Also surviving are five grandchildren: Charlotte Angiolillo, Charles Jackson Egli, Christine Egli, Keegan Jackson, and Rick Jackson. Additionally, she has four great grandchildren: Fred and Carlotta Angiolillo and Bridget and Barrett Jackson.

Emily joined the First Presbyterian Church May of 1954 and was actively involved including serving as a Stephen Minister. Besides her involvement with the Church, she was a 60-year member of P.E.O, a philanthropic educational organization that provides need-based scholarships to young women. She served as the President of P.E.O Chapter AK from 2001 until 2003.

Additionally, she was a longtime volunteer for St. Joseph Hospital transporting patients. Beside her community involvement, she was an avid reader and enjoyed frequent trips to Hilton Head Island, South Carolina with her family.

As a selfless and beloved mother, grandmother, aunt and friend her outlook can best be expressed by her own words – “The meaning of my life is to see that others know that their life has meaning”. ECJ.  Well said and well lived. Thank you, Mom.

The family is appreciative for the wonderful staff of Landis Homes whose care and devotion over the last two years buoyed her spirits and enhanced her life.

A funeral service will be held at DeBord Snyder Funeral Home on 141 E. Orange St., Lancaster, PA. 17602 on Saturday, May 1 at 2:00 p.m.  A viewing will be held from 1:00 p.m. until the time of the service. The service can also be viewed virtually by accessing the following link available on the funeral home website:  https://my.gather.app/remember/emily-jackson

Offer Condolence for the family of Emily Chick Jackson