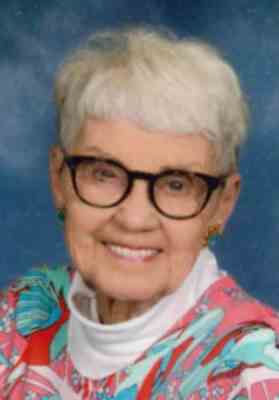 Elouie Farnsworth Snyder, 86, of Willow Valley Retirement Community, passed away at Lancaster General Hospital on January 14, 2016.  She was the wife of Colonel William P. Snyder, USA Ret., to whom she had been married for 63 years.

Elouie – Lou to friends and GaGa to grandchildren – was the daughter of the late Leonard and Ruie (Angell) Farnsworth of Brookfield, VT.  She attended elementary and secondary schools in Brookfield and Barre, and received a bachelor’s degree in elementary education from the University of Vermont in 1951.  Following her marriage in 1952 she taught first and second graders in eleven different states as her husband moved among various Army assignments.  After she and her husband moved to Willow Retirement Community, she continued her work with elementary school students by volunteering at the Hans Herr Elementary School on Book Road.

She loved golf, was excellent on the green and worked hard to improve her swing, and was a good cook who made a delicious chocolate pie.  An avid reader, she particularly enjoyed Jane Austen’s novels, and found time to belong to two active book clubs.  Her other interests were flowers arranging, basket weaving-during a monthly class she passed on her skills to other Willow Valley residents-and making sock dolls, which found their way to her many friends.  She was an active member of the First United Methodist Church in Lancaster, and had helped create and organize the Church Library.

In addition to her husband, she is survived by her children, Marshall, husband of Melanie of Vienna, VA, Morgan, husband of Susan of New York City, and Murray of Clarksville, MD; and eight grandchildren.  She was preceded in death by her twin sister Elaine Tyrell, brother, Owen who died during World War II and by twin brothers, Sherward and Durward.

Offer Condolence for the family of Elouie Farnsworth Snyder