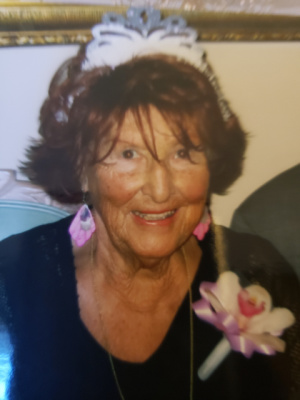 Born in Philadelphia, PA, in 1922, she was the daughter of Camille E. Finck and Anna Chick Finck. She was raised in Westmont NJ.

She graduated from Helene Fuld School of Nursing at West Jersey Hospital in Camden, NJ, with her RN. She served as a Second Lieutenant in the US Army during WWII overseas in France in the nursing corps. Immediately after VE Day, she married Warren, who was also in the Army, in Paris, France, in May of 1945. They raised their family in Pitman, NJ, where she taught Sunday School and was a Cub Scout Den Mother. She worked at Underwood Hospital and then as a School Nurse at the Campus School at Glassboro State Teachers College. During this time, she completed her BSN at The College of New Jersey. Later in her career, she taught health, home economics, driver’s education, and physical education at several area high schools. She retired as a private duty nurse.

She and Warren retired to Florida where they enjoyed the beautiful weather and beach for many years. She was a gifted artist who painted many seascapes in oil. She traveled and cruised extensively and visited 6 of the 7 continents. Because her father was born in France, she loved everything French including her little dog Pierre. She epitomized the French phrase “Joie de vivre”. She adored her children, grandchildren, and great grandchildren and was dearly loved.

Interment will be private and will be held at the convenience of the family in the Arlington National Cemetery.

Offer Condolence for the family of Ellen M. Finck Cassaday