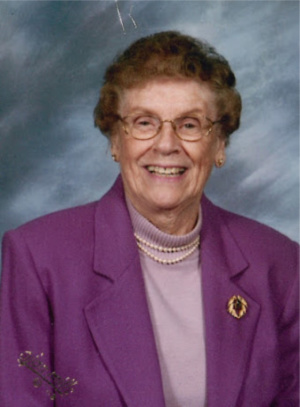 Elizabeth “Betty” J. Kline, 97, passed away, peacefully, on January 3, 2019 at the Masonic Villages in Elizabethtown where she resided since the age of 91.  During her 6-year stay, she was lovingly referred to as “Mother” of the Roosevelt Unit by the other residents and staff.

She was the adoring wife of the late Richard “Dick” D. Kline who preceded her in death in 1991.  Betty and Dick are now rejoined, together with their beloved German Shepherds.

Born in Lancaster, PA, she was the daughter of the late Andrew M. and Loretta E. (Omber) Hess.

After graduating from J.P. McCaskey, Elizabeth spent much of her professional career with RCA, during which time she and Dick built their own home in Holtwood, PA.

She is survived by several nieces and a nephew.

In addition to her husband, she was predeceased by two sisters, Dorothy Hess and Gertrude Deen, and by a brother, Andrew Hess.

Relatives and friends are invited to attend a Memorial Service at DeBord Snyder Funeral Home & Crematory, 141 E. Orange St., Lancaster, PA 17602 on Friday, January 11, 2019 at 10:00 AM.  A visitation will be held from 9:30AM until the time of the service (which Betty would not wish to be too long!).  Interment will follow in Conestoga Memorial Park.  A special thank you to the staff at Masonic Villages for the compassionate care that they extended to Betty during her stay.  To leave an online condolence for the family, please visit: www.DeBordSnyder.com

Offer Condolence for the family of Elizabeth J. Kline