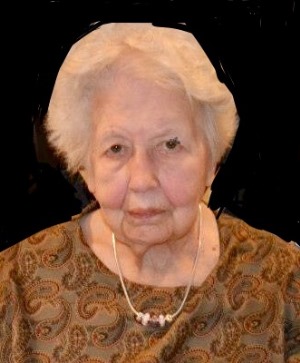 Elizabeth J. Hoover, 94, of Lancaster, died at home on Sunday, March 26, 2017.
She was married 56 years to Ralph K. Hoover. Born in Lancaster, she was the daughter of the late Emil and Mary Horst Hartstein.
Elizabeth was a Nurses Aid for many years and had worked at Quality Care and then retired from Lancashire Hall. She was a member of the Pearl Street United Methodist Church and a former president of the Women’s Auxiliary of the VFW Post 7294. She had been active as a girl scouts and cub scouts leader. Elizabeth enjoyed sewing, gardening, cooking and spending time with her family.
Surviving besides her husband is a daughter, Anne L. wife of Jim Ford of Gilbert, AZ; a son Eric husband of Angela Hoover of Lancaster; four grandchildren, Katherine Hoover of Spring Hill, FL, Eric E. Hoover, Jr. and Nicholas A. Hoover both of Lancaster, and Sarah E. Ford of Gilbert, AZ; two great grandchildren, Sophie Hoover and Chloe Hoover; two step-grandchildren, Stephany R. Carlucci of Fredericksburg, MD and Christopher G. Ford of Baltimore; a sister Alice McComsey of Lancaster, and numerous nieces and nephews. She was preceded in death by a son, Gregory Hoover and by a brother, Robert Hartstein.

A Funeral Service will be held on Thursday, March 30, at 11:00 A.M. at the DeBord Snyder Funeral Home, 141 E. Orange St, Lancaster, PA. Friends may call at the funeral home on Wednesday evening from 6:00 to 8:00 P.M. and on Thursday from 10:00 A.M. until the time of the service. Interment in the Mellinger Mennonite Cemetery.

Offer Condolence for the family of Elizabeth J. Hoover