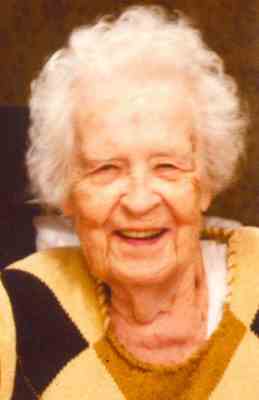 Elizabeth Hosfeld Byers, 98, of Country Meadows of Lancaster, formerly of Merion, PA died September 5, 2015 while under the care of hospice.

Born in Lampeter, PA on January 6, 1917 she was the daughter of the late Willis E. and Nellie Hosfeld Byers.

Miss Byers was a graduate of West Lampeter High School and Shippensburg State Teacher’s College with a Bachelor of Science in Education degree. A school teacher for 39 years, she taught at the Penn Valley Elementary School of the Lower Merion School District for the last 24 years of her career. She was an avid world traveler many times over and enjoyed the many countries she visited.

She is survived by two sisters, Clara B. wife of the late James Trimarchi of Indiana, PA and Nellie B., wife of the late Robert Reynolds of Pittsburgh, PA. She was preceded in death by two sisters, Dorothy H. Byers and Mary B. Peffer, and by two brothers, Robert H. Byers and Willis H. Byers. Elizabeth was a beloved and loving aunt to her twelve nieces and nephews who survive her. Private funeral service will be held at the Longenecker’s Reformed Mennonite Cemetery. Contributions in Elizabeth’s memory may be made to a charity of one’s choice.

Offer Condolence for the family of Elizabeth Hosfeld Byers