You are here: Home / Obituaries / Edwin A. Geisler 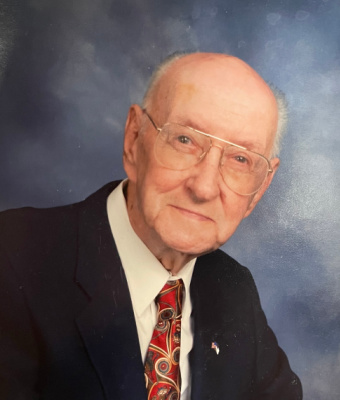 Edwin A. Geisler, 88, of Lancaster, passed away on Tuesday, May 3, 2022 at Woodcrest Villa. He was the loving husband of Sylvia (Burns) Geisler. Born in Philadelphia, PA, he was the son of the late Theodore and Catherine Geisler.
Ed spent much of his career as a Test Engineer for Acme Markets as head of its’ technology department developing two patents. He also spent time as an independent contractor troubleshooting technology concerns for other various organizations. One of his many accomplishments included wiring the entire Valley Forge Baptist Temple in Collegeville, PA for fire and burglary.
In his spare time, he enjoyed reading, “tinkering with technology” and spending time with his wife, Sylvia. He enjoyed playing billiards. He was the captain of the billiards team at Woodcrest Villa that traveled to other retirement communities to participate in tournaments. The Mennonite Home named the Billiard Room in his honor.
Ed was a member of Grace Baptist Church in Lancaster and was a former member of Valley Forge Baptist Temple in Collegeville. He was in the choir at both churches.
In addition to his wife,Sylvia, he is survived by his cousin’s wife, Ruth Jerchau, cousins Dale Jerchau, Dan Jerchau, Karin White and Kathe Bricker, his nephew and four nieces from Philadelphia.
He was predeceased by a daughter, Susan Smith and by brothers,Theodore and Raymond Geisler and by sisters, Martha Crume and Virginia Geisler.
Relatives and friends are invited to attend a Funeral Service at Grace Baptist Church, 1899 Marietta Avenue, Lancaster, PA 17603 on Tuesday, May 10, 2022 at 11:00 AM. A viewing will be held from 10:00 AM until the time of the service. Burial will follow in Rohrerstown Mennonite Cemetery.
In lieu of flowers, contributions in his memory may be made to the General Fund of Grace Baptist Church at the address listed above. To leave an online condolence for the family, please visit: www.DeBordSnyder.com

Offer Condolence for the family of Edwin A. Geisler