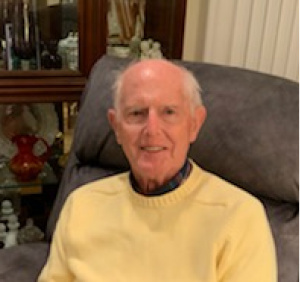 Ed Howell, age 84, of New Holland, went home to be with the Lord on July 7, 2020. He was at home in the house he designed and built 3 years ago, surrounded by his loving family. He and his beloved wife, Jean, had their 60th Wedding Anniversary on July 2nd.

Born in Cedarville, New Jersey, he was the son of James B. Howell and Catherine Howell. Number 3 of 4 boys, he loved to recount stories of flying gasoline model airplanes around his mother’s kitchen and tying the barn cats’ tails together and hanging them over the clothesline.

Because Ed grew up on a farm himself, his life goal was to make farmers’ jobs easier. He graduated with a degree in Mechanical Engineering from the University of Delaware and was drafted into the Army as an engineer for 2 years. He then joined New Holland Machine Company (now Ford New Holland) and stayed there for 33 years designing hay tools (combines and windrowers). He received many patents in the course of his career there and subsequently spent 19 years at MGS and 6 years at Stoltz in Morgantown, PA where he mentored the young engineers who worked there. Jean used to say that he looked so happy when he went to work that he looked like he was going to a party- maybe even happier. He finally retired at the age of 80, but never stopped giving back to the community. He was a volunteer physics tutor at Garden Spot High School as well as the local high school in his Florida home where he and Jean spent their winters. He and Jean would also volunteer together by delivering food with Meals on Wheels, and ushering at the Fulton Opera House.

Family was the most important part of Ed’s life. He was a devoted husband, father and grandfather. As Grandpop to his 6 grandchildren, he was always available to help with math homework via Facetime and talk engineering with his granddaughter who is studying engineering at Drexel. His hobbies were gardening (his garden overflowed with vegetables every summer), growing fruit trees, playing bridge, traveling, and participating in outdoor activities of every kind- kayaking, biking, swimming, running, and working out in the gym. He collected scale model tractors and loved to build puzzles of tractors. Jean designated a room in their home as Ed’s playroom where all of his tractors reside.

Ed is survived by his beloved wife of 60 years, Jean, and 2 children, Suzy Watkins (married to Warren B. Watkins, III) of Warrenton, Virginia, and Ed Howell, Jr. (married to Kirsten Howell) of Allentown, New Jersey, as well as six Grandchildren, Katie, Ryan, and Abby Howell, and Caroline, Carter and Alston Watkins. Ed is survived by his brothers, Jim and Joe Howell and was predeceased by his brother David.

Faith was a constant in Ed’s life, and he was a member of the Official Board at New Holland United Methodist Church for many years, was a 48-year member of Toastmasters, and recently joined the Lions Club. He was a member of the American Society of Agricultural Engineers from the time he was a student in 1958 to the present and a registered Professional Mechanical Engineer in the state of PA since 1962.

A private graveside service will be held at Cedar Hill Cemetery in Cedarville, New Jersey with a Memorial service to follow at a later date. In lieu of flowers, memorial contributions can be made in Ed’s name to-the Juvenile Diabetes Research Foundation at JDRF.org, or the American Cancer Society.

Offer Condolence for the family of Edmund Orlando Howell