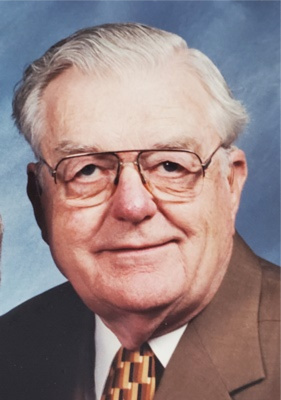 Dr. Henry Stauffer Wentz died on Sunday, January 5, 2020 at Arbor View at Willow Valley Retirement Community at the age of 98. He was born on March 14, 1921 to Joseph and Arline Stauffer Wentz and named after grandfather, Henry M. Stauffer. He graduated from Upper Leacock High School in 1937, Duke University in 1941, and Jefferson Medical College in September, 1944, where he was a member of Alpha Omega Alpha, an honorary medical fraternity. After an internship and residency at the Lancaster General Hospital he was stationed at Fort Sill, Oklahoma in the Medical Corps of the Army of the United States.

Dr. Wentz married his college sweetheart, Mary, in 1943 and returned to Lancaster County in May 1948 when he began his solo practice of general (family) medicine in Strasburg. Dr. Wentz was assistant physician in the poliomyelitis unit at the Lancaster General Hospital from 1950 until it closed in 1957 with the advent of the Salk & Sabin vaccines. He helped Dr. Nikitas Zervanos begin the Family Practice Residency Program at the Lancaster General Hospital. He developed the model family practice unit in Quarryville in 1972 and worked with the program from 1971-74. He returned to help establish a group practice at Eastbrook Family Health Center on Route 30 East and retired in 1988 after 40 years of medical practice.

Dr. Wentz and his wife served in short term service with Care/Medico in Honduras and the Christian Medical Society in the Dominican Republic. Henry has worked at Standing Rock and Fort Belknap Indian Reservations in North Dakota and Montana, respectively.

Dr. Wentz was a member of the Peter Wentz Farmstead Society Board of Directors and President of the Edward Hand Medical Heritage Foundation which collected medical artifacts for future display. The Foundation helped the Lancaster General Hospital develop some of their historic displays.

Dr. Wentz is survived by his two children, William H. (Anne) of Cincinnati, OH and Louise W. (Thomas) Aument of Lancaster. He is also survived by four grandchildren, Jennifer (Tim), Janine (Dan), Brandon (Michelle), and Cameron (Amanda), 3 great-grandchildren and several nieces and nephews. He was predeceased by his wife, Mary, with whom he celebrated 75 years of marriage.

The family would like to thank the staff on the 3rd floor of the Glen and the Arbor View staff for their supportive and nurturing care while a resident on your floor. He always commented about how much he enjoyed and appreciated all the staff.

Offer Condolence for the family of Dr. Henry Stauffer Wentz