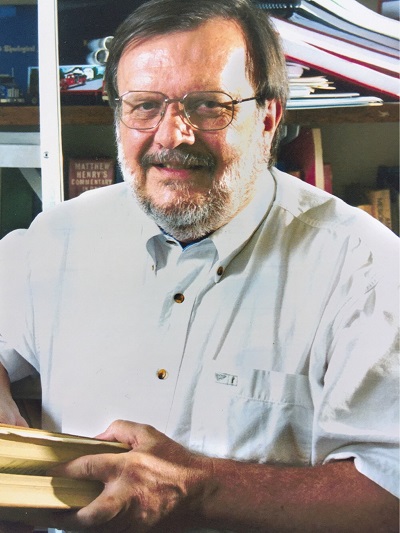 Dr. Edgar William Conrad, formerly of Lancaster County, Pennsylvania, died at the age of 74 on April 15, 2017  in the Wesley Hospital in Brisbane, Australia after a long illness.  His funeral was held on May 5th in the Indooroopilly Uniting Church, also in Brisbane.  Born in West Willow September 15, 1942, to Amos Kreider Conrad and Violet Reese Conrad, Ed Conrad graduated from Penn Manor High School in Millersville, received his BA from Lebanon Valley College in Annville in 1964, graduated from United Theological Seminary in Dayton, Ohio with an MDiv in 1968, and was awarded a ThM in 1969 and a PhD in 1974 from Princeton Theological Seminary in Princeton, New Jersey. Afterward he was awarded the Mellon Postdoctoral Fellowship at the University of Rochester in New York and taught at La Salle College in Philadelphia. In 1977 he joined the academic staff of the newly established Department of Studies in Religion at the University of Queensland in Brisbane, Australia.  Professor Conrad received the University of Queensland Excellence in Teaching and Learning Award in 2002 for innovation in advisement and support of master’s and PhD students.

A leading researcher in the field of biblical studies, Prof Conrad authored four books (Fear Not, Warrior; Reading Isaiah; Reading Zechariah; and Reading the Latter Prophets) and co-edited three other books, also writing numerous articles. Two of his books and lecture series were translated into Korean. He published articles and books in North America, Europe (including the UK), Asia, and Australia. He was elected Fellow, Institute for Advanced Study in the Humanities, The University of Edinburgh, 2002 and conducted research also at the University of Heidelberg and the University of Sheffield as well as at Princeton Theological Seminary, Lancaster Theological Seminary, and Union Theological Seminary in Richmond, Virginia.

Conrad served on the Editorial Board for the journal The Bible and Critical Theory and was President of the Australian Association for the Study of Religions. Among his activities at the University of Queensland, he served as Head of Department of Studies in Religion and Chair of the Arts Faculty Postgraduate Studies Committee.  Prof Conrad retired in 2006.   In 2010 he received an alumni citation from Lebanon Valley College in Annville, Pennsylvania.  In 2012 a Festschrift was published in his honour: The One Who Reads May Run, edited by Roland Boer, Michael Carden, and Julie Kelso.  A book for a popular audience that Ed was writing before his death will now be co-authored by Dr Julie Kelso of Bond University, who will be finalising it: The Bible in the News: The Bible in a Post-Truth Age. Ed Conrad is survived by his wife of 52 years, Linda (Slonaker), originally from Virginia and living now in Brisbane, and by a brother, Jay Richard, who lives in Willow Street.   There will be a  private memorial service for the family.

Offer Condolence for the family of Dr. Edgar William Conrad