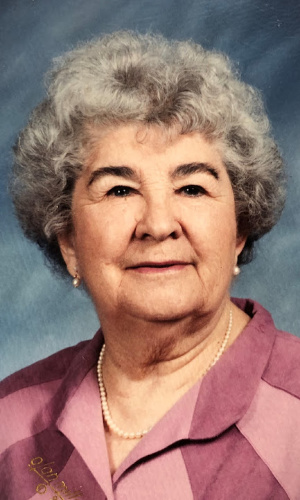 Dorothy Mae Snyder passed away after a brief illness at Lancaster General Hospital on April 25, 2020. She was 97.

Dorothy Mae Postles was born on October 16, 1922 and raised on a farm in Milton, Delaware. Dottie was a bright student and was able to skip the second grade. She began college at West Chester State Teachers College in West Chester, PA at the age of 16, and studied elementary education. While there, she met her future husband, James Raymond Snyder. After college, Dottie taught school in Milton while Jim was a fighter pilot during WWII. At the end of the war, Dottie moved to Texas, where Jim was a pilot instructor. They were married on February 13th, 1947. They later moved to Wilmington, Delaware. Dottie became a homemaker until she returned to teaching in 1965. After retiring, they moved to the Pocono area, where they remained very active. Jim and Dottie canoed, rode bikes and snowmobiles, and square danced. Dottie was quite the seamstress and made matching square dance outfits for the two of them. Following her husband’s death in 1991, Dottie later moved to Willow Valley Retirement Community in 1996. There, Dorothy joined a theater group, and acted in plays. She also sang in chorus, worked to organize transportation for Willow Valley residents, assisted in the Willow Valley post office, and tutored elementary students in Lancaster.

Dorothy was a very feisty, outgoing, social person. She had a good sense of humor, and a robust, infectious laugh. She was proud of her keen intellect, and was the first girl in her family to attend and graduate college. Dottie was outspoken and expressed her views vigorously. She became proud of her independence after she was widowed. She loved chocolate and anything made from crabs. Dorothy was a fashionista and wore sparkly clothes with coordinating jewelry, and loved to shop. Dottie loved her family, and was involved with her children, grandchildren, and great-grandchild.

She is survived by her son, James Raymond Snyder II and his wife, Debbie; her daughter, Sandra Snyder Kirckhoff and her husband Robert (Sam), her son, Ronald Wayne Snyder and his wife, Edie. Grandchildren: Sonya Bowman, Melissa Topping and Joshua Kirckhoff, and one great grandchild.

Offer Condolence for the family of Dorothy Mae Snyder