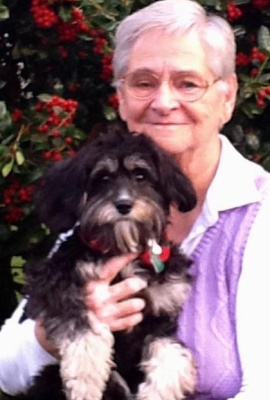 Doris Ruth (Heath) Squires, 87 years of age, quietly departed this life on August 21st at the Mount Joy Hospice Center in Mount Joy, Pennsylvania; comforted by the presence of her children and beloved dog, Spiffy.

Doris was born on January 6th, 1934 in Adair, Audubon County, Iowa, to the late Mrs. Eunice Irene (Covault) Heath and Mr. Elwin Clare Heath, a farmer and WWII USNR Fireman. Doris was one of four daughters and preceded in death by sisters Lorna and Margery.

At an early age, Doris professed her faith in Jesus Christ and joined the First Christian Church where she was a dedicated member and served her Lord and savior faithfully. Her influence as a devoted Christian woman will forever remain in the lives of all who knew her.

Doris attended Guthrie Center High School where she was known for her academic excellence, tying for second highest honors as salutatorian with a remarkable 3.2 grade average. She proudly assisted in the library for which she earned a medal for her efforts, played the oboe for which she also earned a band medal, and pitched on the Guthrie High softball team. It was around this time that she married Mr. Darryl Reeves, who was honored with the Purple Heart for his heroic efforts and life sacrifice in the Korean War.

In pursuit of a career in education, Doris continued her studies in Math, English and Spanish, and went on to teach English and Math at the Panorama High School in Panora, Iowa. It was then that she united in holy matrimony to the late Charles William Squires, the love of her life, who was tragically lost in 1968, at the age of 39. This union was blessed with three children, Diane, Jeanne and John.

Doris loved to read her bible, pray for and with others, spend time with family, and had a passion for crosswords and puzzles. She was a devoted wife, mother and friend.

Doris is survived and cherished by her children, Jeanne (Steve) Cowan and John (Kristen) Squires, 8 grandchildren, 6 great-grandchildren, sisters Janet Clark and Enola Hansen, and many nieces, nephews, cousins and loved ones.

In lieu of flowers, donations can be made to:

Offer Condolence for the family of Doris Ruth (Heath) Squires