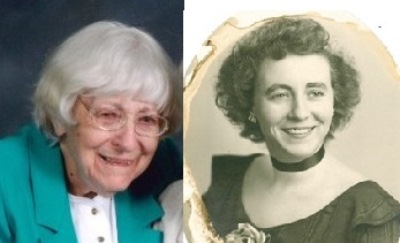 Doris M. Clark, 88, of Masonic Village, Elizabethtown, died on June 6, 2015.  She was the devoted wife of Leonard James Clark, her sweetie, who died in 2010 just before their 60th anniversary.

Born in Lancaster, PA on September 16, 1926, she was the daughter of the late Valentine A. Kirchner and Emma Christina Vatter Kirchner.  She is survived by her beloved daughter, Jeanne M. Brooks, her fiancé Harry Freas, and Leonard’s sister, Jean Harriet Chappell whom Doris considered her own sister and best friend.  She was preceded in death by a brother, Valentine G. Kirchner.

Doris graduated from Lancaster Catholic High School in 1944.  She was selected to go to Purdue University in Indiana for 6 months to become a drafting aide for RCA where she worked until 1952.  She was a member of the Order of the Eastern Star, and USO.  Doris was a homemaker for most of her life, devoted to her husband and daughter.  She enjoyed the 20 years of travelling and adventure while Len was in the Air Force.  In retirement they traveled, cruised and took many road trips together to see friends all over the country.  She LOVED to dance with Len and they were amazing to watch (sometimes fellow dancers would stop dancing just to watch them.)

Doris was the best mom ever, a gift from heaven that her daughter will always be thankful for.  She taught Jeanne important life lessons and was always there for her.  Friendly, kind, caring, thoughtful—all who knew her loved her.  Her card sending was legendary—from birthdays to encouragement—another one of her endearing traits.  She was upbeat and strong to the end and was a stellar example of living a good life.  So many will miss her.

A Celebration of Life will be held on Wednesday, September  16, 2015 at the Lancaster Liederkranz, 722 S. Chiques Road (Manheim, PA), Located between Mt. Joy & Salunga. Visitation with the family from 2-6 PM.  She “didn’t think much of computers,” so please send cards like she would have.

Offer Condolence for the family of Doris Mae (Kirchner) Clark