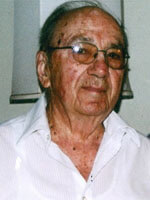 Clyde R. Gamber, Sr., 101, of Lancaster, passed away on Friday, December 16, 2016 at the Mennonite Home.  He was the loving husband of the late Dorothea S. Gamber who preceded him in death in 2006.  Born in Lancaster, PA, he was the son of the late Gabriel and Laura (Sensenick) Gamber.

He received an undergraduate degree from what is now Millersville University.

Clyde Spent much of his career as an educator and later in life worked in sales.

He was a member of St. Peters Evangelical Lutheran Church in Lancaster.

In his spare time, he enjoyed traveling, watching sports, spending time with his family.  He spent his summers in Mount Gretna, PA and winters in Vero Beach, FL which he thoroughly enjoyed.

Relatives and friends are respectfully invited to attend a Funeral Service at DeBord Snyder Funeral Home & Crematory, 141 E. Orange St., Lancaster, PA 17602 on Tuesday, December 20, 2016 at 10:00 AM with Rev. Sarah Teichmann officiating. Friends may greet the family from 9:00 AM until the time of the service. Interment will be in East Petersburg Mennonite Cemetery.

Contributions may be made in his memory to St. Peters Evangelical Lutheran Church, 10 Delp Rd, Lancaster, PA 17601.

Offer Condolence for the family of Clyde R. Gamber, Sr.