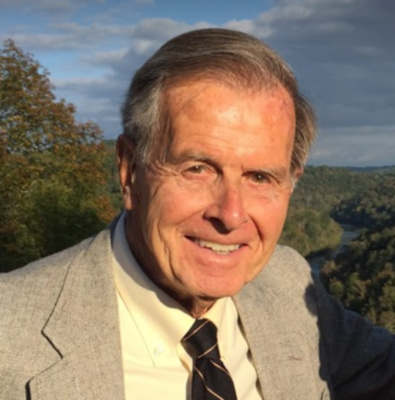 Clayton Coe Butzer passed away on January 12 at Lancaster General Hospital after a short illness.

Clay was born in Ridgewood, NJ on June 10, 1930, the son of Albert and Katharine (Coe) Butzer. He grew up in Buffalo, NY and graduated from The Nichols School in 1948.  While there, he played soccer, ice hockey and baseball.   At Middlebury College, Clay met and started dating his future bride, Barbara Eckman, during freshman orientation.  They became engaged senior year and graduated in 1952.  Clay was also a member of Sigma Phi Epsilon fraternity at Middlebury, and served as president.

Because of the ongoing Korean War (and despite never having flown on a plane!), Clay enlisted in the US Navy Pilot Training Program at Pensacola, FL, graduating with a commission as an ensign.  He married Barbara in 1953 and they moved to Wickford, RI near the Quonset Point Naval Air Station.  He   flew P-2V Neptune aircraft, used to track Soviet submarines and conduct search and rescue missions over water.   Powered by two jets and two propeller engines, it was nicknamed “two burning, two turning.” Deployments took Clay and the squadron to North Africa, Newfoundland, Iceland, Greenland and the Caribbean.  After becoming a patrol plane commander, he and his crew received a Letter of Commendation from the Canadian government for locating and rescuing a ship in distress in the waters north of Hudson Bay.

After completing four years of active duty in the Navy, Clay’s career continued to foster his love of aviation: first in the aerospace industry, then in metals when titanium was not only used in aircraft engines but was pioneered in the medical field.  He held executive sales positions for several companies in a career that spanned over three decades.

While living in two different communities in New Jersey, Clay served as a Presbyterian Church elder and was on the Hunterdon County Board of Elections.  He also participated with Barbara on a variety of school, sports team and community projects. Summers were always special because it meant time spent at their lake house and then beach home in Avalon, NJ, surrounded by children, grandchildren and their golden retrievers.

In 2006, Clay and Barbara sold their beloved historic farmhouse in New Jersey and moved to Barbara’s hometown of Lancaster, PA.  They quickly became immersed in the community life at Homestead Village and became active members of the Church of the Apostles.

Clay loved his family and counted down the days until they arrived for holidays, birthdays, or no occasion at all. If the driveway was packed with cars and the house full of lively pandemonium, he was in the middle of it all.

He was a gifted story- teller and his vast repertoire of jokes was legendary. Clay was also sentimental. His toasts at special occasions elicited both laughter and tears, and he expressed love, encouragement and gratitude to those who touched his life – especially with his hand-written notes.    He understood that forging lifelong relationships and friendships was an art.

He was modest about his legacy and good fortune, and always credited Barbara as “the best thing that ever happened to me.” His devotion to her was unwavering, and she was the true heart and center of his life.  In addition to Barbara, Clay is survived by four adoring children:  Stephen (Christine), Molly (Tom), Randy (Wendy), Amy (Tom), nine grandchildren and three great-grandchildren.

Offer Condolence for the family of Clayton Coe Butzer