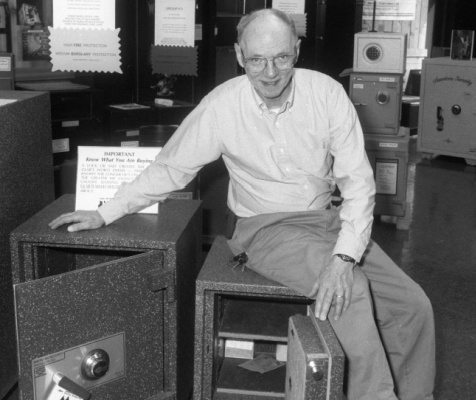 Chester “Chet” L. Gontner passed away on January 16, 2021 at Lancaster General Hospital at the age of 87. How befitting it was on this date many years ago that he directed the stage play, “The Night of January 16” while stationed in Libya as a member of the United States Air Force.
Chet was born on January 7, 1934 to Chester L. and Elsie (Criddle) Gontner in Lewistown, PA. Moving to Lancaster in his youth, he graduated from J. P. McCaskey High School and Franklin and Marshall College, then joining his father in the locksmithing business.
For many years Chet was known as “Mr. Wizard,” owning Wizard Lock and Safe Company until 2008 when he sold it to his faithful employees. He was a member of the Red Rose Pistol Team in his earlier years, contributing his marksmanship to the team’s yearly standings.
Chet is survived by Kay, his wife of 60 years, a sister and a brother-in-law, Martha and Alban Tippins and several cousins.
A private graveside service will be conducted at the convenience of the family. In lieu of flowers, please consider a memorial contribution to the Humane League of Lancaster County, 2195 Lincoln Hwy E, Lancaster, PA 17602.
Debord Snyder Funeral Home & Cremation, Inc 141 E. Orange Street, Lancaster, is in charge of arrangements. To leave an on-line condolence visit www.DeBordSnyder.com.

Offer Condolence for the family of Chester “Chet” L. Gontner