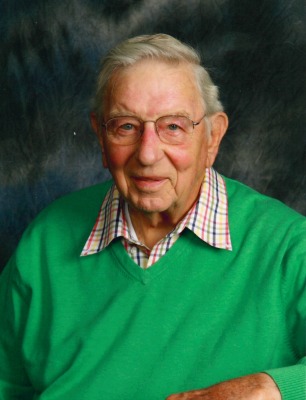 Charles “Chuck” Taylor, 90, of Lancaster, PA, went home to be with the Lord Jesus Christ on October 15, 2017 at Hospice at Community Care in Mount Joy.

Chuck was born on February 6, 1927, in Battle Creek, Michigan, to the late Howard and Jennifreid Taylor.  He graduated from Lakeview High School in 1945.  After serving in the Navy during World War II, Chuck graduated from Michigan Technological University in Houghton, Michigan with a degree in Chemical Engineering in 1950.

Chuck was a 37 year employee of The Kellogg Company.   After 26 years in Battle Creek, Michigan, he became the first Plant Manager of the Kellogg Company plant in Lancaster.    Chuck and his wife Marilyn are members of Westminster Presbyterian Church and have been residents of Brethren Village for eight years.

As a dedicated volunteer, Chuck worked with young men for many years in Boy Scouts in Battle Creek, MI and Compass Mark in Lancaster, PA.  His hobbies included wood working and sharing that skill with others. Chuck also served with Laborers for Christ and was assigned to many projects around the country to build or renovate churches. His family treasures the many items he created/built adding a special touch with his chip-carving.  Chuck was active in all the school, sports and church activities with his children and grandchildren.  He enjoyed watching Detroit Tiger baseball and University of Michigan football.

Chuck was the loving husband of Marilyn Wulf Taylor with whom he celebrated 67 years of marriage in July.  He was a wonderful father to his four children: Kate Queen (Joe Sam) of Waynesville, NC, Mark Taylor (Debbie) of Millersville, PA, Lori Porreca (Dan) of Landisville, PA and Tom Taylor (Lori) of Lancaster, PA.   He is also survived by 10 grandchildren and 12 great grandchildren.

Offer Condolence for the family of Charles “Chuck” Taylor