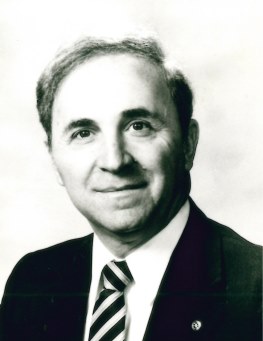 It is with sadness the Lohin family announces the passing of Charles Lohin, beloved husband, father, grandfather and great grandfather. With great joy, we celebrate his extraordinary life.

Charles was born fittingly on Independence Day 1930 to Charles and Julia Lohin, immigrants from Czechoslovakia. He knew hard work watching his father come home from the mines black with coal dust while he himself picked coal to help with a tight budget. His mother did most everything else, raising the family, baking the daily bread and tending to the garden. He learned the importance of God, Family and Country from them and this guided him throughout his life.

In his youth, Chilly served as cantor at Saints Peter & Paul Byzantine Catholic Church in Minersville.  He was elected president of his high school class.  He quarterbacked the fighting Cass Township High Condors and played basketball and baseball.  He considered entering the priesthood.

In the fall of 1951 while studying at Penn State, his plans were forever changed when he first laid eyes on Jean Myers, commenting to his best friend:  “I’m gonna marry that girl.”  Not one to fail, they were wed on September 5, 1953. It was the beginning of a lifelong union based on boundless love and mutual respect.

Charles was proud of his military service in the Navy. True to his inherent kind nature, he was a healer rather than a fighter in his role as a radiology technologist. This experience fueled his interest in the medical profession. Little known to many, he was accepted to medical school, a realization of the American Dream founded on the hard work of his parents and the expression of his God-given talents. Ultimately, he chose family above his own aspirations as he and Jean became proud parents in their new home, Lancaster.

Fortunately for many, his life’s work transitioned to education. He taught seventh grade science at Manheim Township.  Subsequently, he served as Principal of J. P. McCaskey High School for 13 years, arguably the contribution to society from which he derived his greatest satisfaction. He guided the school with skill and compassion amidst the turbulent times of the 60’s.

Following his “retirement,” he moved on to the IU 13 as a trainer of future administrators, and then, to the Lancaster County Chamber of Commerce organizing the school to work program. He held consulting seminars on organizational excellence.  He ended his working life as President of the PA Association of School Retirees, helping those who educate our children. Throughout his professional career, he helped people reach their true potential.

Charlie loved music and the times with dear friends at the Fulton. His eyes lit up when his granddaughter Kennedy played the piano and sang, clapping at the beginning, middle and end of the song, even on the day before he passed. He and Jean enjoyed ball room and polka dancing. He reveled in both the natural and supernatural worlds, from watching birds to learning about extraterrestrials and psychic healers such as Edgar Casey. He followed the predictions and once hosted Jean Dixon, a top psychic of her time, at McCaskey High.  He read avidly, allowing him to converse with ease with people of diverse backgrounds.  He was a prolific writer.  At the time of his death, two children’s books were in development.  In keeping with his calling, he was committed to lifelong learning and earned his PhD in education in his mid-seventies.

He transcended his illness with passion, courage, dignity and grace. Throughout, he found great joy in engaging everyone he met with charisma and genuine interest. When someone talked to Charlie, he always made them feel better. When his time arrived, there was no anger or remorse, only kindness and love. He taught us how to live, and how to die.

In the end, it was all about God, Family and Country, in that order, just like he learned as a child. We are reminded of the Family Tradition of Dad composing  a unique grace before each holiday meal.  Mom would always cry and say “that was a good one.”  Then we would eat and laugh and love each other. Dad always remembered and prayed for the deceased souls then, and  it is fitting that we celebrate his amazing life now that he too is “at a distance.”

Private interment will be held in the Indiantown Gap National Cemetery, Annville, PA with Military honors at the convenience of the family.

Offer Condolence for the family of Charles Lohin