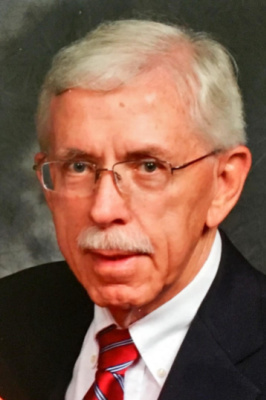 Charles E. DeBruin, also known as Chuck or Charlie, 80, of Lancaster went home to be with the Lord on Saturday, Oct. 9 after a long struggle with Lewy body dementia. Born in Pella, Iowa to Arnold and Bernice DeBruin he attended Pella High School. After graduating Charlie went to Drake University in Des Moines, Iowa. He was a member of Delta Sigma Pi business fraternity and received his degree in Business Administration in 1964.

At the beginning of his senior year at Drake he met Susan Miller. They were married a year later at the First Baptist Church in Fort Dodge, Iowa. They resided in Des Moines where Charlie began working for the tractor division of the Ford Motor Company. A year later Charlie was transferred to work in Troy, Michigan. While living in Royal Oak and Lake Orion, Michigan, the DeBruins welcomed several foster children into their home, Chuck joined the Army Reserves serving for six years, 14 year old Carol was adopted, and three sons were born, Ted, Troy and Tyler. In 1987, Chuck was transferred to Ford Tractor Operations in New Holland, PA. The family settled in West Lampeter and soon welcomed additional foster children. Seven month old Jessica joined the family in 1988 and was adopted a few years later. 14 year old Ronald Zahm was also welcomed into the home and stayed for six years.

After 36 years of employment, Chuck retired from Case New Holland in 2000. He proceeded to drive a school bus for Brightbill Transportation for 13 years in the Conestoga Valley School District.

Chuck was an active member of Westminster Presbyterian Church and a charter member of Harvest Presbyterian Church for 12 years before returning to Westminster. At the churches he attended he enjoyed serving in a variety of roles including as an usher, on finance and missions committees and with youth in Awana, Boys Brigade, Sunday School and VBS. In retirement he also helped with recreational activities for a homeschool group and was a camp counselor at Conestoga Bible Camp.

Throughout his life Chuck maintained an active lifestyle and enjoyed a variety of activities including golf, motorcycling, jogging, biking, walking and racquetball. For years he took annual visits with friends to Center Lake Bible Camp in Michigan for men’s retreat weekends. He spent countless hours assisting as a youth sports coach and attending his children and grandchildren’s athletic events. He will be remembered as a humble and consistent provider for his wife and family, faithful servant to Christ and His church, and beloved grandfather.

Chuck is survived by his wife Susan, three sons, two daughters and their spouses: Ted (Rachel) of Colorado, Troy (Amy) of Elizabethtown, Tyler (Laura) of Strasburg, Carol Burmann (Kurt) of Arizona and Jessica Van DeMark (Chris) of Missouri. Grandchildren include Jael, Addie, Alayna, Molly, Luke, Lydia, Ella, Elliot, Simon, Ruby and Graham DeBruin and Michael, Anastasia and Ethan Van DeMark. He is also survived by two brothers and their wives, Larry and Lee DeBruin of Pella, Iowa; and Stanley and Ann DeBruin of Johnston, Iowa. He was preceded in death by his grandson, Anthony Isaac DeBruin in 2014.

The family would like to thank everyone who helped care for Chuck this last year including the staff at Calvary Homes in the fall of 2020 and Hospice and Community Care throughout 2021.

A memorial service will be held at Westminster Presbyterian Church, 2151 Oregon Pike, Lancaster on Saturday, October 16 at 1 p.m. Lunch will follow the service. Burial will be private. The service can be live-streamed at: https://www.westpca.com/live-streaming

In lieu of flowers, contributions can be made to Special Olympics, an organization he supported for over 50 years.

Offer Condolence for the family of Charles E. DeBruin