You are here: Home / Obituaries / Captain Harry A. Spencer, Jr. 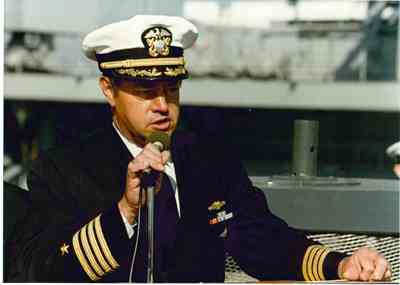 Captain Harry Arthur Spencer, Jr. USN (Ret.), 87, of Willow Street, PA passed away peacefully on July 24, 2017 at Lakeside, Willow Valley. He was born in Lincoln, NE on December 25, 1929 to Judge Harry Arthur and Leone (Eggenberg) Spencer.
Harry spent the majority of his childhood in Lincoln and was an Eagle Scout. He graduated in 1947 from Northeast High School in Lincoln and attended the University of Nebraska-Lincoln for a year; prior to his selection to the United States Naval Academy, Annapolis, MD. At the University of Nebraska, he played football and was a member of Alpha Tao Omega fraternity. After a football injury at the Academy he turned to boxing, ultimately reaching the Brigade finals in his weight class. He graduated from the United States Naval Academy in 1952 with a Bachelor of Science in Engineering. After graduation, he married his high school sweetheart, Betty Darlene Hathaway, on June 14, 1952. They were married for 61 years; she predeceased him in 2013.
Harry’s first assignments in the Navy were to the USS Winston (AKA 94) and the USS LSM 268, serving in the Korean conflict and participating in prisoner repatriations. Submarines were always his first love. He was selected for and entered Submarine School in June 1955. He served with distinction in various capacities on the following submarines: USS Queenfish (SS 393), USS Capitaine (SS 336), USS Sawfish (SS 276) – Officer-in-Charge, USS Aspro (AGSS 309) – Executive Officer, USS Charr (SS 309) – Executive Officer, USS George Washington (SSBN 598) – Navigator/ Executive Officer, and USS Sablefish (SS 303) – Commanding Officer. Additionally, he had postings at Submarine Squadron Three Staff aboard the USS Sperry (AS 12), Joint Strategic and Targeting Staff at SAC, USS Fulton (AS 11) – Executive Officer, Submarine Group Two Staff, Submarine School – Executive Officer, and OPNAV Staff.
Early in his career, as the Officer-in-Charge for two Reserve Training Submarine Divisions, he was also responsible for submarine support for the filming of the TV series Silent Service and several movies. During this time, he met, was entertained by, and rubbed shoulders with many Hollywood notables. As Executive Officer, he led the SSBN George Washington through her first major overhaul, helping to write the book for this class of submarines.
In June 1977, he was selected for Major Command, the USS Vulcan. Always a groundbreaker, Harry had the distinction of being one of the first three COs to have women assigned and later was the first to deploy women overseas. His policies and operations were vital to the successful integration of women into the “Bluewater” Navy. In his next assignment at the Pentagon, he helped create the concept of prepositioned military supplies and fast Sealift; implementing those concepts that were later to be so successfully used in Operation Desert Shield in support of the Kuwait conflict. During his career, he was awarded the Joint Service Commendation Medal, Meritorious Service Medal, and the Legion of Merit.
Following his retirement in January 1982, Harry worked for the Vitro Corporation for ten years, reuniting with his first love, submarines, helping to bring into service the new Trident submarine. Additionally, he is the author of the book Stern Wakes and Bow Waves. Harry loved hunting and fishing right up to his last few years. He was a Master Mason, a 65-year member of North Star Lodge #227 Lincoln, NE. Throughout all his life his greatest source of pride was his children, grandchildren, and great granddaughters.
He is survived by his three children: Jill S. Sundquist (John) of West Chester, PA, Dr. Harry A. “Hank” Spencer, III, DVM (Rebecca) of Marshfield, WI, and Dr. Joy H. Spencer-Fuller, DDS (Dr. Robert, DDS) of Washington, D.C.; his eight grandchildren: Amanda J. Sundquist; Esquire (Michael Mariani), Matthew J. Sundquist, CRNP (Kathleen), Harry A. Spencer, IV (Mariah), David A. Spencer, Elizabeth L. Spencer, Esquire, Holly E. Fuller, Dodd H. Fuller, Esquire, and Ellen N. Fuller; his two great granddaughters: Charlotte E. Mariani and Emma M. Sundquist. He is also survived by his four siblings: Pagean Carter, Marlene Mansfield, Lee Harlan, and Terry Spencer (Pat). In addition to his parents and wife, Harry was predeceased by his brother, Victor Spencer.
The family will receive visitors from 9:00 AM to 11:00 AM on Saturday, August 5, 2017 at the DeBord Snyder Funeral Home, 141 East Orange Street, Lancaster, PA 17602. A memorial service will be held on Saturday, August 5, 2017 at 2:00 PM at the Spring Run Auditorium, 950 Willow Valley Lakes Drive, Willow Street, PA 17584. Harry will be interred at Arlington National Cemetery with full military honors at a later date.
In lieu of flowers, memorial contributions may be made to the United States Naval Academy Alumni Association and Foundation, 25 Maryland Avenue, Annapolis, MD 21401 ( https://www.usna.com ).
The family wishes to express their appreciation to the staff of Lakeside at Willow Valley Communities, DaVita – Lancaster, and Hospice & Community Care for their dedicated care.

Offer Condolence for the family of Captain Harry A. Spencer, Jr.