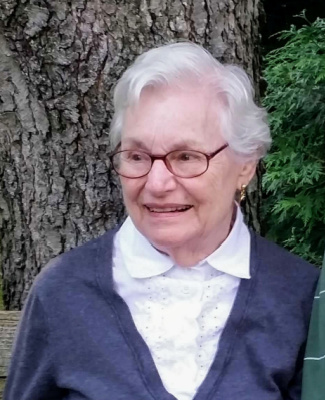 Christine Virginia “Ginny” Cherry of Lancaster, 89, died on December 27, 2020, at the Mennonite Home, Lancaster PA. She was the wife of Rev. William T. Cherry, with

whom she shared 68 years of marriage, and who passed away in October.  Born in Philadelphia, she was the daughter of the late Rev. Paul Wesley Bare and Elva Anna Bare of Parkesburg.

Ginny was born on June 28, 1931, the youngest of three children (both her siblings were brothers.)  Like many in the family tree, her father was a Methodist minister and served a handful of churches, including Summit Hill, Marcus Hook and Glenmoore (where Ginny entered high school at Downingtown High) before entering the chaplaincy and serving in WWII and Korea.  She graduated high school in 1948 and, having decided on a career in nursing,  entered a three year program at Methodist Hospital.

She graduated from Methodist in 1951.  Shortly after that she met Bill; they began dating and were married the following August.  Bill was in seminary and simultaneously serving a few small churches in the Upper Main line, including Paoli Methodist, so they settled in Paoli.  As Bill’s ministry expanded so did the family, in the form of three boys, born five years apart.

Ginny was a gifted musician.  She began studying piano at five and showed extraordinary natural talent and developed into a brilliant player by the time she was out of high school.

She had the opportunity to play professionally but instead decided to channel her gift into teaching and ministry.  She taught privately throughout her life and had well over a thousand students of all ages, and regularly received heartfelt expressions of admiration and gratitude for her efficient method and her wonderful disposition.

Ginny actively participated in Bill’s ministry at Paoli and subsequent appointments.  She was an expert in both hymnody and United Methodist forms of worship. She conducted youth and adult choirs at every church they served, and spearheaded several specialized chorale groups, including a choir of blind singers and a Madrigal group. She was Bill’s tireless ally in countless ways and over the course of his ministry was a key contributor to his success.  She was a person of faith and humility and her mission was to serve any way she could wherever she saw a need, both in and out of the church. She visited shut-ins and welcomed anyone of any race or creed who might have a need into her home.  She was a friend to the friendless.

Her favorite appointment was Arch Street in center city Philadelphia, where she spent as much free time as she could visiting the art museum and other cultural attractions the city had to offer.  She was an excellent and versatile cook and on occasion prepared a meal for dozens of parishioners in one seating. She had a wonderful sense of humor that ran back and forth from subtle to silly.  She was a devoted and compassionate wife and a patient, supportive and entertaining mother.

Bill and Ginny traveled extensively as their schedule allowed, including trips throughout Europe and the States, Russia, Canada, and the Islands.  Summer vacations were spent at a cottage in the Poconos.  At times Ginny’s mother joined the family on vacation, as she did at home many times through the year.  Her father passed away in 1963, so “Grandmom” was more than happy to have the company and the company was certainly more than happy to have her.  As Ginny said often, her mother was as close to a saint as anyone she ever knew.  She truly was God’s faithful servant, and instilled much of the same attitude of devotion and commitment in her daughter.

Bill and Ginny were genuinely nice people and made friends easily. They met monthly for decades with a group of friends connected to the church dubbed “Just Desserts” for lively conversation, good companionship and dessert.  She was well-liked at Mennonite Home where she spent her final days.  Even as her mind began to drift she was greatly appreciated for her kind spirit, engaging personality and keen sense of humor.  She will be missed.

She is survived by three sons, Steven Cherry of Berwyn, Ronald Cherry of West Chester and Douglas Cherry of Lancaster.  Also surviving are four grandchildren and three great-grandchildren.

Services will be private at the convenience of the family at Greenwood cemetery.  In lieu of flowers, memorial contributions can be made to First United Methodist Church, 29 E. Walnut Street, Lancaster, PA 17602;  or Mennonite Home Communities, 1520 Harrisburg Pike, Lancaster, PA 17601.  To leave an online condolence please visit www.debordsnyder.com

Offer Condolence for the family of Christine Virginia “Ginny” Cherry