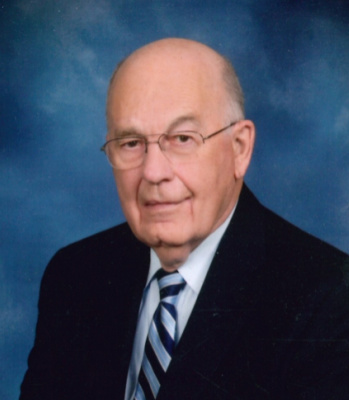 As a senior at Clinton HS, Burt took first place in the high jump at the 1951 Iowa State Track meet.  In one multi-state meet, he competed against Wilt Chamberlain and lost (imagine that).  He was also on the swimming and diving teams.  In addition, Burt became the HS Student Body President by winning over 90% of the vote.

Burt met the love of his life as a freshman while at Cornell College.  He was a waiter in the cafeteria and his boss turned out to be a senior, Ruth Temple.   Their romantic relationship started slowly but in the end Burt and Ruth’s marriage would last 57 years.

Burt ultimately transferred to the University of Iowa and graduated in 1956 with a Bachelor of Science degree in Chemical Engineering.

He worked for DuPont for 34 years in several roles (manufacturing engineer, technical sales, area supervisor, and senior business analyst) until his retirement in 1990.  During his DuPont years, Burt and family lived in Richmond, VA (twice!), Circleville, OH and Wilmington, DE (twice!).  He was a member of St. Paul’s United Methodist Church in Wilmington, DE for 30 years and held various positions there.  One service opportunity that was especially meaningful to him in the 1970s was to help settle Vietnamese refugees, the Nguyen family, into the U.S.

Burt excelled in many hobbies including writing poetry and prose.  He loved puns and passed the joy of them down to his children.  Burt and Ruth were avid bell collectors and gave well over 100 bell presentations to schools and organizations.  He was a wood craftsman and built dozens of beautiful cherry furniture pieces. Many family vacations were spent in the national parks that Burt loved to explore.

In 2004 Burt and Ruth moved to the Willow Valley Retirement Communities in Lancaster County, PA.  Burt delighted many people with a new hobby of his, “fauxtography” – a form of visual punnery.  He spent thousands of hours digitally editing photos and displaying them near their apartment.  Occasionally he would share his creations more widely in public slideshows which were very popular.

Offer Condolence for the family of Burton Lawrence Kirkman