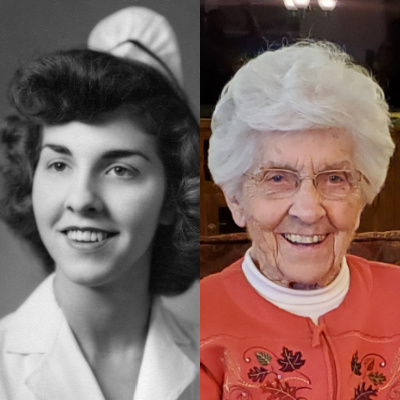 Bernice Gerhart, age 97, died on September 2, 2022, at Landis Homes in Lititz, after a 15-year struggle with lymphoma.

Born in Lancaster, she was the daughter of the late Harold A. and Anna M. Paulsen Krentz, and the wife of Jack S. Gerhart, who died in 2014. She and Jack met as members of the Class of 1942 at J.P. McCaskey High School, and were married 66 years.

Bernice was a proud graduate of Lancaster General Hospital’s School of Nursing, Class of 1946. At the end of her training, she spent a memorable 8 months in the Army Cadet Nurse Corps and was stationed at Ashford General Hospital in White Sulphur Springs, West Virginia, also known as The Greenbrier, a hotel that was converted to an Army hospital during World War II. She helped treat many critically wounded soldiers from the European Theater, and always considered the opportunity to serve as a nurse at Ashford a great privilege and honor.

Upon returning to Lancaster, Bernice practiced as a private-duty nurse. During that time, she and Jack were married. After their children were born, she continued to work part-time as a nurse, and then worked at the Lancaster Planned Parenthood Clinic for many years. She retired in 1980, and she and Jack conducted an antiques business known as The Country Look for more than 20 years. After Jack’s death, Bernice moved into an apartment at Landis Homes in Lititz, where she enjoyed a wonderful view of Amish farmland.

Bernice also enjoyed volunteer work for local organizations, including Meals-On-Wheels, The Pennsylvania Academy of Music, Lancaster General Hospital, and Christ Evangelical Lutheran Church in Lancaster, where she was a lifelong member. She also was a longtime supporter of Lancaster Farmland Trust and its worthwhile work preserving our county’s farms. Bernice was a member of LancasterHistory, and was passionate about the history of our country, our city, and her German-immigrant ancestors on Cabbage Hill. In 1983, she and Jack traveled to Germany to research her roots.

Her greatest pleasure was hosting holiday events and meals and visiting with her children, grandchildren, and great-grandchildren. She also greatly enjoyed family vacations. She and Jack hosted annual family trips to Rehoboth Beach, and took the family on a cruise to Bermuda to celebrate their 50th wedding anniversary. Bernice enjoyed bridge, pinochle, golf, quilting, and cooking. She also enjoyed many decades as an engaged and principled citizen, supporting such causes as civil rights, women’s health, the environment, and historic preservation, as well as numerous charitable organizations.

Friends and relatives are respectfully invited to attend a funeral service on Friday, September 9, 2022 at 11 AM at DeBord Snyder Funeral Home, 141 E. Orange St. Lancaster, PA 17602. A closed casket visitation will be held from 10 AM until the time of service. PLEASE NOTE: Masks are required for those in attendance. Burial will be private at the convenience of the family.

Offer Condolence for the family of Bernice Jane Krentz Gerhart