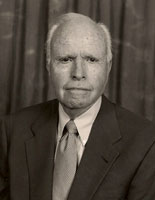 He joined Barclay White and Co. in 1949 and ultimately served as President and Chairman. He was Chairman of Barclay White, Inc. from 1978-1991, and a Partner with Glencoe Associates from 1986 to the present.

A member of West Chester Friends Meeting, Barclay served on the Board of Friends Hospital, the Fleer Corporation, Skytop Lodge and on the Executive Committee of Westtown Friends School. He was President of the Carpenters Company, a member of the General Building Contractors Association, the American Society of Civil Engineers, the American Arbitration Association Construction Panel, and the National Association of Professional Engineers.

A Meeting for Worship will be held at the Westtown Meeting at Westtown School in the coming weeks. In lieu of flowers, please send donations in his honor to Westtown School, Westtown, PA.

Offer Condolence for the family of Barclay White, Jr.