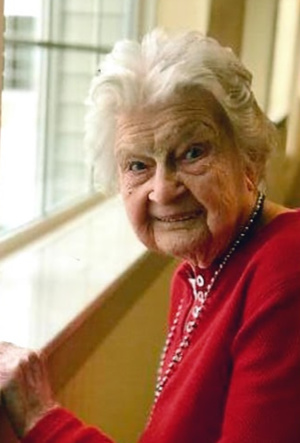 Barbara Gladys Southard, age 95 of Lancaster passed away at LGH, surrounded by loved ones on Saturday, November 24, 2018.

Born and raised in Maidenhead, Berkshire, England, she was the daughter of the late Arthur & Beatrice Bayliss Kille.  She was also preceded in death by 6 sisters.

Barbara was the loving wife of Maynard F. Southard (Her Yank); they celebrated 53 years of marriage before his passing in 1997.

After graduating from the Boynton Hill Girls Academy, she was employed by the Weber Department Store in Maidenhead, England. Barbara was a championship swimmer in the early 1940’s, and very proud of the fact that she competed in the English Channel.  During WWII in England she, along with her father and sisters served as a Plane Spotter & Air Raid Warden for the British Army Aux.  She met our father during WWII while he was serving in the U. S. Army Signal Corps, they married and she arrived in the United States aboard the Queen Mary in April, 1946. She was one of the 1st English War Brides in Lancaster County, PA.  She was very proud of her British heritage, the Queen and the Royal family.

She retired from RCA, Lancaster Plant after 37 years of service.

Barbara loved the water and her greatest joy was spending time with her kids on the Chesapeake Bay at the family bay house, Red Point Beach, Northeast, MD. She enjoyed traveling to Rehoboth Beach, Delaware to see the ocean and walk the boards with her daughter, Shirley, who was always by her side.

Barbara (Cookie) as many knew her was a remarkable strong willed and determined woman.  She dearly loved her family and friends, she touched more lives than she will ever know.  She will be sorely missed, we were all blessed to call her “our mother” and thanks be to God for all the years he shared her with us.

(Our Mum) is survived by her son, Peter and 3 daughters, Linda (Nevin), Shirley (Boyd), Mitzi (Norm, deceased).  Grandchildren (Abby & Hanh), Great Granddaughters (Aleah & Morgan) also surviving are numerous nieces and nephews in England and the US.

A Funeral service will be held on Friday, November 30, 2018 at 2:00 PM at the DeBord Snyder Funeral Home & Crematory, 141 E. Orange St. Lancaster, PA 17602. A visitation will be held from 1:00 PM until the time of service.  Private interment will follow in Millersville Mennonite Cemetery.

Offer Condolence for the family of Barbara Gladys Southard