You are here: Home / Obituaries / Arthur B. Buchholz, Jr. 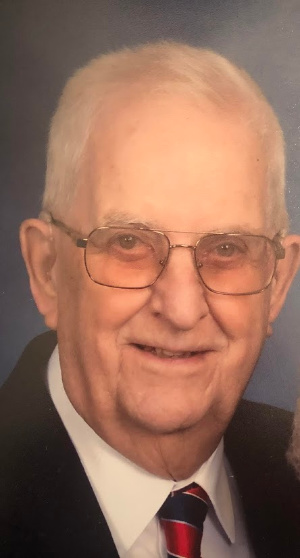 Arthur B. Buchholz, Jr. died on November 8, 2019 at Willow Valley Communities, in Lancaster, PA, just 2 weeks short of his 95th birthday.  He was the beloved husband of the late Barbara (Bobby) Buchholz who preceded him in death in 2018.

Mr. Buchholz was born November 23, 1924 to the late Arthur B. and Daisy May (Weeks) Buchholz in Hudson, NY, and was the youngest of 6 children. The four oldest also preceded him in death, Lewis, Jane (Carter), Marion (Jung), and Priscilla (Frisbee). His sister Ann (Alden) lives in Slingerlands, NY.

He is survived by two sons; A. Bruce (husband of Judy) of Moorestown, NJ, and William R. (Bill) (husband of Debbie) of VA, six grandchildren, Major Brian (husband of Katharine), Kevin, Kathleen (Oosthuizen – wife of Stefan), Lauren, Karen and Dan, two great grandchild, Connor and Madeleine, and many nieces and nephews.

He proudly served as Technical Sergeant in the US Army Corps of Engineers during WWII, stationed in the Pacific Theater. While there he saw service from New Guinea, to the Philippines, and with the Occupation Army of Japan.  He was commissioned as a 2nd Lieutenant in the US Army Reserves after the war. He often joked that he had contracted all the jungle diseases imaginable, including Malaria, Diphtheria, Dengue Fever, and others from working in the waters building bridges, piers, and embankments. The 2 battalions he was associated with had 80% casualties, with a high percentage due to disease.

Mr. Buchholz graduated from Hudson High School, and went on to graduate from Cornell University, Ithaca, NY, with a degree in Agricultural Engineering. He and Barbara were active in Cornell Alumni events and fund raising, and while he was a second generation Cornelian, he was very proud that both his sons (Bruce and Bill) graduated from Cornell, as well as his grandson (Brian). While in school, he was a member of the Alpha Chi Rho fraternity, and a member of the Sage Chapel Choir.

After school, he worked as a manager for GLF (predecessor to AGWAY), at multiple locations including Canton and Hamilton, NY.  He left GLF to become the Sales Manager at Foster Refrigerator Corporation, in Hudson NY. He went on to take a position with the Division of Standards for the State of New York, in Albany, NY, retiring with the State as the Director of Standards and Purchase.

He had many hobbies and interests.  He was an active golfer, playing until he was 93, and shooting his age, (playing Grandpa’s rules).  He enjoyed bird watching, and was a covered bridge aficionado – traveling to every known bridge in New England and the mid-Atlantic region, while recording each with maps, photos, and history.  He also maintained an active genealogy on the Buchholz, Van Allan, and Kunz families. He was very active with the Boy Scouts of America, attaining the rank of Eagle Scout, and saw both sons and two grandsons attain Eagle rank. He and Barbara traveled the world after retiring, visiting large portions of the United States, Canada, as well as Europe, Asia, Australia/New Zealand, South America, and the Middle East.

Offer Condolence for the family of Arthur B. Buchholz, Jr.