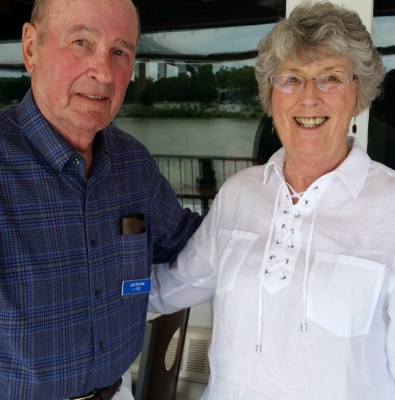 Anne Milliken Brown, of Lancaster, Pennsylvania, and formerly of Bel Air, Maryland, loved her family, faith, and friends. Anne passed away on Tuesday, September 21, 2021, at the age of 84.   She lived an exceptional life, blessed with a loving husband, 4 sons, 9 grandchildren, extended family, and many devoted and life-long friends. Anne loved to quilt, knit, and find ways to make her corner of the world a better place. She was loving, kind, and generous, making her much loved by everyone who knew her.

Anne was born Harriet Anne Milliken on March 13, 1937, in Wilkinsburg, Pennsylvania to Edward and Dorothy Milliken.  She was the eldest of three children, Ted Milliken, of Pine Twp, PA, and Ginny Buzzard of Marietta, OH.  It was in high school at Wilkinsburg High where “Annie” started to build community, a gift that would last a lifetime.  Anne spent two years at Western College for Women in Oxford, Ohio then transferred to Penn State where she became a Chi Omega and met her husband, James. C Brown.  In 1959 she graduated with a degree in Home Economics and married Jim in February of 1960.  Their marriage lasted 61 years and brought a house full of boys–Jim, David, Chuck and Bill.

While Jim worked for United States Steel for 38 years, Anne raised their 4 boys.  It was a full house that moved a lot.  In Cleveland, Ohio, Jim and David were born, and Chuck and Bill were added after they moved back to Pittsburgh. The household would relocate from Pittsburgh to Waterloo Iowa, St. Louis, Missouri, back to Pittsburgh, and eventually to Bel Air, Maryland where they would live for over 30 years.  All the while Anne raised their boys with humor, confidence, dignity, and instilled in them the gentle act of caring for others.  Anne led by example supported by a strong Methodist church community and a network of friends.

Anne never had daughters but was blessed with 3 wonderful daughters-in-laws, Cheryl, Jennifer, and Michelle. In 2012, a son-in-law was added to the family when David married Benjamin. Anne was a devoted and caring grandmother to Stephanie, Amanda, Chaz, Grace, John, Matt, Torie, Caroline, and Abby and just this summer joyfully welcomed Julian to the family as Amanda’s husband. Family meant everything to Anne yet her caring nature impacted so many more.

Anne was active in the American Association for University Women, P.E.O., United Methodist Women, and when she saw a need she created programs to fill them.  As a member of Bel Air United Methodist Church Anne started Pass-It-On Ministries. This ministry co-operates with the Harford County Community Action Agency, Harford County Department of Social Service, other county agencies, and other local churches to provide financial assistance to residents of Harford County for utility turn-offs, eviction notices, and security deposits.  Anne also started a support group for Grandparents raising grandchildren.  “Anne is the dearest dearest person, she is simply the greatest person in the world,” says Igrid, a member of the group. Anne was named an “Unsung Hero” by the state of Maryland. After moving to the Willow Valley Community in Lancaster, PA, Anne and Jim became active members of the racial equity and social justice group as well as the LGBTQ+ support group.

Relatives and friends are invited to attend a memorial service on Saturday, October 2 at 4 pm at the Bel Air United Methodist Church, 21 Linwood Ave, Bel Air, MD 21014. A time to visit with the family will begin at 3 pm, followed by the service. The family requests that guests wear masks and follow the example of the entire family by being vaccinated.  Anne believed in family, community, and science.

In lieu of flowers, memorial donations can be made to Pass-It-On Ministries online at https://belairumc.org/giving/ , calling 410-838-5181, or mailing a check to Bel Air United Methodist Church  21 Linwood Ave, Bel Air, MD 21014. In the Memo Line write “Pass-It-On”.

Offer Condolence for the family of Anne Milliken Brown