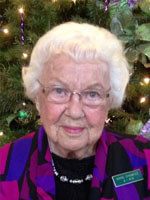 Anne H. Chomicz, 94, of Willow Valley Communities, Lancaster, PA, passed away on Sunday, Nov. 20, 2016.  She was born Dec 21, 1921, daughter of Daniel and Louise Heyburn. She was a graduate of Cranford High School (NJ) and Washington School for Secretaries (New York City). She worked for Merck & Co, in Rahway, NJ, where she met her husband, Peter of Ann Arbor, Michigan, a U of M grad and Chemical Engineer at Merck.

The family was active in the Willow Grove Presbyterian Church, where Anne was a Charter Member since 1953 and served 14 years as Church Secretary.  Anne moved to the Willow Valley Community in 1997 and was a member of the First United Methodist Church, Lancaster, PA.

Relatives and friends are invited to Anne’s ‘Life Celebration’ on her 95th birthday, Wednesday, Dec. 21, at the Thomas Auditorium of Willow Valley Lakes, 300 Willow Valley Lakes Drive, Willow Street, PA 17584 for a 10:30am ‘Gathering’ followed by an 11am Service.  Interment will be private at Fairview Cemetery, Westfield, NJ, at the convenience of family.

Offer Condolence for the family of Anne H. Chomicz