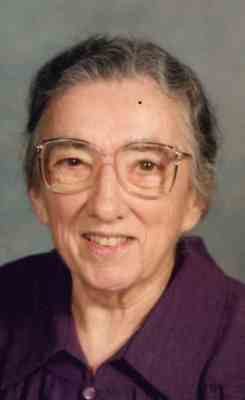 Born in Manor Twp, she was the daughter of the late Ira K. and Annie S. Mann.

Anna served the Lord throughout her life in employment and church involvement.  She worked in migrant ministry in various states in the Voluntary Service Program of Eastern Mennonite Missions from 1951 to 1961.  Later she worked at Philhaven Hospital, Lebanon and at Pleasant View Home in Manheim.  In retirement years, she was employed by Visiting Nurse Association of Lancaster.  She had creative and historic interests.

She was a member of the Millersville Mennonite Church, serving as a Sunday School teacher for 60 years.

Surviving are four sisters, Helen M. Herr of Willow Street, Cora M. Hoover of New Providence, Martha M. married to Landis Sangrey of Lititz, and Kathryn Mae married to Lamar Stauffer of Lancaster; a sister- in-law, Pauline Lenox Mann of Wisconsin; a brother-in-law Andrew Shaub of Lititz; and by nieces and nephews.  She was preceded in death by an infant sister, Esther, by a brother George Mann and by a sister Edith Gochnauer Shaub.

A Funeral Service will be held on Saturday, January 9, 2016 at 10:30 A.M. at the Millersville Mennonite Church, 439 Manor Avenue, Millersville, PA with the Rev. Millie Penner officiating.  Friends may call at the church on Saturday from 9:30 A.M. until the time of the service.  Interment in the adjoining church cemetery.  In lieu of flowers, contributions in her memory may be made to Eastern Mennonite Missions, 53 West Brandt Blvd., Salunga, PA 17538 or to Mennonite Central Committee, 21 S. 12th St., Akron, PA 17501.

Offer Condolence for the family of Anna K. Mann