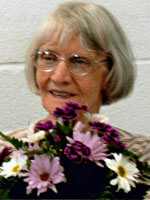 Born in Fulton Twp., Lancaster County, she was the daughter of the late J. Earl and Anna Link Flahart. Her loving husband, Ralph M. Campbell died January 25, 2002. They had been married since June 30, 1946.

Amy was an honor student and graduated from Drumore Twp. Schools, completing her 4th year of high school in Quarryville. She attended Millersville State Teachers College for approximately 3 years.

She was a long-time active member of Covenant United Methodist Church.

Her hobbies included sewing and she made most of her family’s clothing. She also donated her talents to her church and relatives. Amy also loved writing poetry and stories. Some were published including poetry in the Quarryville Sun during the 1940’s.

Friends and relatives are respectfully invited to a visitation on Monday, August 28, 2017 from 11 a.m. until the funeral service at 1 p.m. at Covenant United Methodist Church 110 N. Mulberry St. Lancaster PA 17603. Burial will follow the service at Riverview Burial Park.

Please omit flowers. Contributions in Amy’s memory may be sent to Covenant United Methodist Church or a charity of one’s choice.

Offer Condolence for the family of Amy Campbell