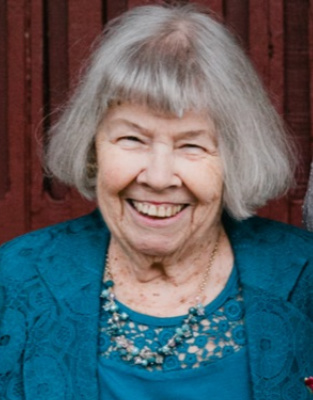 Adele Ohl Batdorf Mueller was the second of two children, born on May 14, 1926 to Claude and Agnes Batdorf in Erie, PA.  Affectionately called “Buttercup” by her father, Adele peacefully died in her sleep at the age of 94 while residing at St. Anne’s Retirement Community in Columbia, PA, and went to heaven to be with her Lord and Savior Jesus Christ on May 21, 2020.

After graduating from Academy High School in Erie, Adele attended Indiana State Teachers College in Indiana, PA, where she earned a B.S. in Mathematics.  She taught mathematics at the high school in St. Mary’s City in Elk County, PA. She also pursued post-graduate education while attending summer classes at the University of Pittsburgh in 1949 and 1950.

Adele met her future husband, Mark Muth Mueller, in 1950 at a roller skating party at an Erie church social. She was the love and anchor of Mark’s life. They were married on June 28, 1952 at Simpson Methodist Church in Erie. During WWII, Mark was a Marine Corpsman serving in Okinawa, Japan at the last battle of the war. Returning to the USA after the occupation of China with the Sixth Marines in 1946, he graduated from Alleghany College in 1949. While still somewhat adrift, due in part to PTSD, Mark met Adele. According to his much-loved sister, Mary Boenke, “because of Adele, Mark had a life, a good full life”.

Adele was a strong, energetic woman devoted to family, friends and her faith. The steam engine of the Mueller family train, Adele willingly gave up her math teaching career and pursuit of a Masters Degree to become a full-time wife and mother while living much of her life in Baltimore County. She was a Den mother in Cub Scouts, a PTA volunteer, and Sunday School teacher at Loch Raven, Methodist Church. To others, Adele was generous with her time and readily available whenever called upon for assistance. She had a lot of common sense so it was she that her family went to for practical advice; consequently, her adult children would thereafter consider, “What would Mom do?”, in various situations. Adele was also a devoted daughter to her mother, Agnes, particularly when she lived with Mark and Adele from 1971-1988, as the caregiving became increasingly demanding as Agnes succumbed to dementia.

Adele was an extrovert who made lifelong friends from school, work, church, travel, and especially the neighborhood “Glenmont Girls”, who were mothers also raising their children from 1960-1971. Since she loved to dance, play the piano and listen to music, these activities played a part not only in her home life but also in social activities. Whether at home dancing to the ‘Buddy Dean Show’ on TV or organizing with the Glenmont Girls a series of couple dance lessons, she enjoyed any opportunity to dance. Symphony music played from the WBAL radio station while Adele cooked in the kitchen, in addition to her attending community concerts, musicals and theater with friends. She also enjoyed humor and conversation, playing cards, bowling, and good food prepared by others.

Although Adele was reticent about talking of her Christian faith, her service to others spoke volumes. She was Board President of ‘Business Girls Lodge’ in Baltimore City, offering short-term lodging to women. When her church sponsored a refugee Cambodian family in the 70’s, Adele was the primary source of transportation while attending to many needs of Suvong and her family. As a leader of Methodist Women, Adele organized, cooked and served many meals for church functions, such as Blue & Gold Dinners, funerals and weddings. She also led Bible study groups and was an active participant in the discussions.

Preceded in death by her parents, beloved brother Leland Batdorf, and her husband Mark of 60+ years of marriage, Adele is survived by her 3 children, Carol Adele Mueller Jackson (Dennis) of Taos, NM; David Mark Mueller (Kathy) of Millsboro DE; and Garry Leland Mueller (Dori) of Lancaster, PA; her 8 grandchildren: Daniel Mark Mueller (Lori) of Bel Air, MD, David Blair Mueller(Karolina) of Millsboro, DE, Katie Audette Mueller of Philadelphia, PA, Sarah Lynn Mueller of Philadelphia, Rachel Leigh Mueller of Tucson, AZ, Rebekah Laura Mueller Asay (Camden) of Hoboken, NJ, Erik Robert Fries (Paige) of Lancaster, PA, and Andrew B. Fries of Chandler, AZ. Adele was known as “GGMa” to her 9 great-grandchildren and is also survived by many nephews and nieces throughout the country. Surviving in-laws include Mary and Jon Boenke and Carl Mueller, and dear Glenmont girlfriend, Jan Peacher. In lieu of flowers, donations can be made to the Wounded Warrior Project. Interment was held on May 31, 2020 at Dulaney Valley Memorial Gardens in MD, beside her deceased husband, Mark.

Offer Condolence for the family of Adele Ohl Batdorf Mueller