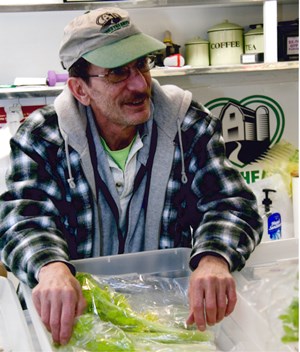 Vincent L. Hillegas, 69, of Lancaster, PA passed away on Saturday, September 16, 2017 at the Lebanon V.A. Hospital.
Born in Bethlehem, PA, Vince was the son of the late William A. and Helen (C. Zart) Hillegas. He was the loving husband of Patricia “Trish” (Aichele) Hillegas to whom he had been married 24 ½ years.

He was a graduate of Penn Manor High School, and honorably served his country in the United States Air Force during the Viet Nam War earning a rank of Airman 3rd Class.
For 41 years, Vince was employed by Weis Markets as produce manager. Following his retirement, he became known as “The Celery Guy” at Lancaster’s Central Market after he opened his celery stand there. He enjoyed meeting and talking with friends and family at Market, discussing everything from celery to his love of cars, duck pin bowling at the Elks club and all sports, particularly the Baltimore Orioles. He was a lifelong fan and loved his trips to the ballpark. If you liked talking baseball you became a treasured friend to Vince.

He and his wife Trish shared a passion for their dogs. For over 25 years, most weekends were spent with their beloved English Springer Spaniels at dog shows, showing and raising their Springers. His 15 minutes of fame was when his “Katie Girl” won Best of Opposite at Westminster Kennel Club.
He was a long time member of the Lancaster Kennel Club. He also loved showing his English Cocker Spaniels, but in his last years he fell in love with a tiny rescue dachshund named “Megatron.” Many happy tails are wagging on the other side of the Rainbow Bridge.

In addition to Trish, he is survived by his sister, Audrey Zart of New Holland, PA and his brother, William Hillegas of Lancaster, PA, along with nieces and nephews who adored their “Uncle Vince” and “Pop-Pop Vinnie.”
Relatives and friends are respectfully invited to attend a Memorial Service at the DeBord Snyder Funeral Home, 141 E. Orange St., Lancaster, PA 17602 on Thursday, September 28, 2017 at 5:00 p.m. The family will greet friends at the funeral home, also on Thursday from 4:00 until time of service. Interment will be on Friday, September 29th at Conestoga Memorial Park; 95 Second Lock Road, Lancaster, PA at 11:00 a.m. Military Honors will be accorded by Red Rose Veterans Honor Guard and Vet 21 Gun
Salute.
In lieu of flowers memorial contributions may be sent to “Lebanon VA Hospice Unit,” Lebanon VA Medical Center, ATTENTION: Voluntary Service (10V), 1700 S. Lincoln Ave., Lebanon, PA 17042

The family would like to thank the doctors, nurses and staff at the Lebanon V.A. Hospital for the extraordinary care and kindness which was extended to them and to Vince during his illness.

Offer Condolence for the family of Vincent L. Hillegas