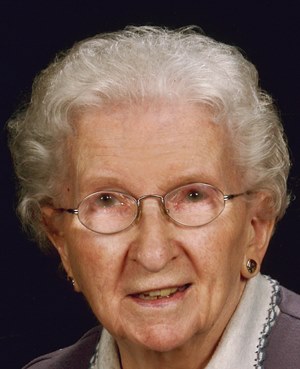 She was a member of Grace Lutheran Church since 1931 where she was a former member of the bell choir and was active in Senior and fellowship groups.  She served as volunteer for the Council of Church’s Community Clothing Bank for 5 years.

Jennie graduated from Marietta High School in 1927 and Lancaster General Hospital School of Nursing in 1930. Her lifelong occupation was as a Registered Nurse, and later as a Private Duty Nurse. She was a life member of the LGH Nurses Alumni Association, where she was twice president.

She was a member of the Landis Valley AARP Chapter 3856, where she served 2 years as president.  She and husband Charles were volunteer guides at the Landis Valley Museum for 18 years.  Jennie also volunteered for 5 years in the Weathervane gift shop. Her hobbies included playing bridge and gardening.

She is survived by her daughter-in-law, Twila M. (Amey) Baker of Jacksonville, FL; three grandchildren: Amy (Jeff) Allison of Marysville, OH; Mark Baker of Sacramento, CA and Susan (Nick) Nance of Tampa, FL.  She was predeceased by her son, Charles F. Baker, Jr. and four brothers.

Funeral services will be announced at a later date.

Offer Condolence for the family of Jennie C. Baker