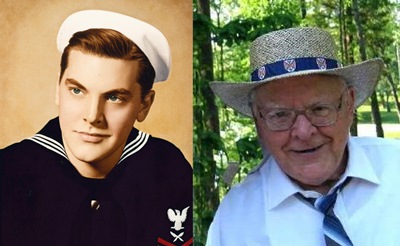 Edwin C. Greenwald, 89, of Lancaster, passed away at home surrounded by his family on Tuesday, April 28, 2015.  He was the loving husband of the late Alberta S. (Rose) Greenwald to whom he was married for 49 years.

Born in St. Clair, PA he was the son of the late August and Edith (Stickloon) Greenwald.

Ed’s professional career was with Armstrong World Industries retiring as plant supervisor after 40 years of employment.

In his leisure time he enjoyed rifle and archery hunting, fishing, visiting the cabin in the mountains which he and his wife built in Clearfield County, and spending time with his family.  He also had a small business selling his handcrafted folkart.

He proudly served in the U.S. Navy during WWII stationed in the Philippines as a Yeoman First Class and was recently recognized for his patriotic service by the Secretary of the Navy.

He was a member of the VFW, AMVETS and the West Branch Hunting Club in Clinton County.

He is survived by three daughters; Candice G. Kurtz (wife of Robert) of Charlottesville, VA; Pamela R. Greenwald of Lititz, PA; and Patti G. Haines (wife of Emerson) of Willow Street, PA.  He was the proud grandfather of Bradford G. Rutter of Los Angeles, CA, Robert Hunter Kurtz, of Arlington, VA, Gregory H. Rutter, II, of Lancaster, PA and William Chase Kurtz of San Francisco, CA; and four great-grandchildren.  Also surviving is his companion Sallie Bickhart and his brother Raymond Greenwald.  In addition to his wife he is predeceased by a sister Beatrice Kraus, formerly of Alexandria, VA.

Relatives and friends are respectfully invited to attend a Funeral Service at the DeBord Snyder Funeral Home & Crematory, 141 E. Orange St., Lancaster, PA 17602 on Friday, May 8, 2015 at 11:00 AM. Friends may greet the family on Friday from 10:00 AM until the time of the service. Interment will be private and at the convenience of the family.  In lieu of flowers contributions may be made in his memory to Wounded Warriors Project at 855.448.3997.

Offer Condolence for the family of Edwin C. Greenwald,